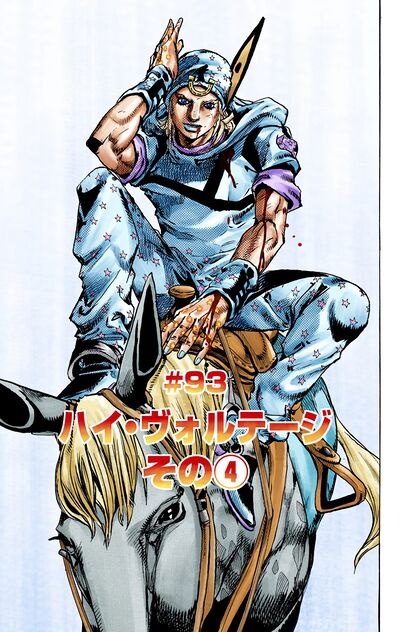 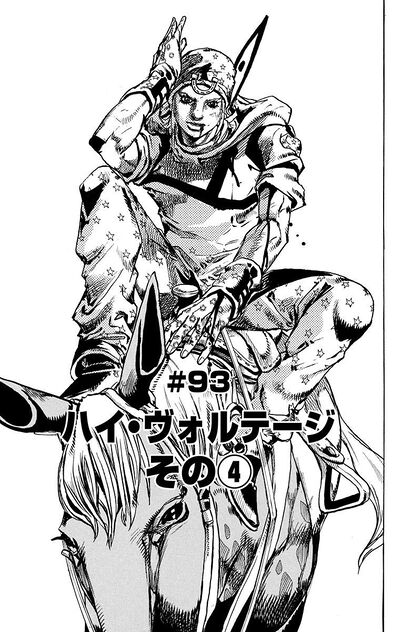 Diego succeeds in setting Johnny on fire using THE WORLD's time stop. Johnny has ACT4 rip open a hole in the ground and jumps into the sewers, using the water to douse himself. Johnny, despite not having direct line of sight, is still able to hear the sounds of Diego's horse galloping. Diego realizes his predicament and begins racing forward. This causes him to catch up with other racers and confuse Johnny to which one is him. Diego starts to think that Johnny could still follow him, and that so much as coming in contact with ACT4 would mean his defeat. Refusing to let that happen, Diego becomes determined to follow Valentine's instructions and beat Johnny. Johnny finally locates Diego and begins shooting through the floor with nails imbued with the Golden Spin and by extension ACT4. Diego is then mobbed by a group of fangirls, whom he immediately plans to use as human shields. Diego stops times and positions his fans in a way that they would be hit by ACT4. The innocent women are hit by Tusk's fists and destroyed by its power as Diego smiles at his escaping a death blow. Diego cheekily blames Johnny for their deaths.

During his attack, Johnny notices that Diego's horse has stopped and begins to think that he might have been killed.

Johnny continues after he finds the exit of the sewers, though it is then that he notices Diego and his horse still alive. With 3 km left, Johnny and Diego directly confront each other once more, with Johnny in 5th place gaining on Diego in 3rd place. They prepare to end the battle knowing that only one of them can cross the finish line.

"When I am near him, getting near to a limit place of position of 5 seconds between me and he, will be the time to shoot" "Come! Johnny Joestar", called Diego to Johnny "The end of this struggle shall arrive soon!" Johnny calls Tusk ACT4 and shoots his fingernails while on a perfect position but before the nails hit, Diego stops the time and jumps in the air. The next five seconds will define the battle.