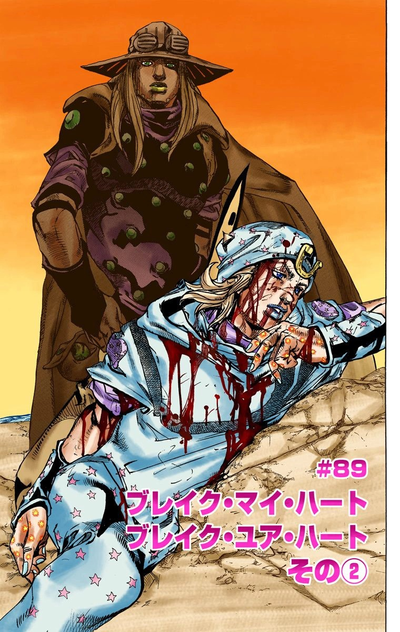 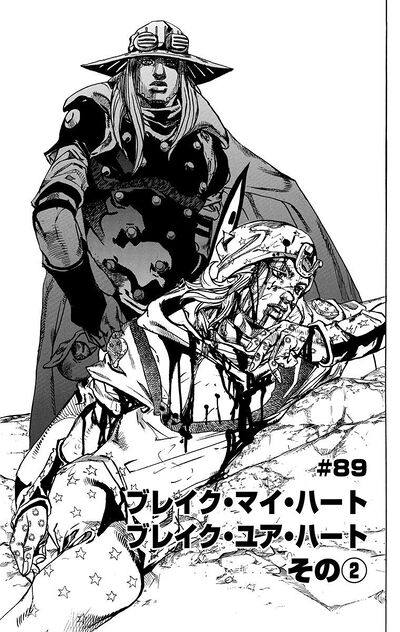 Johnny admits that Valentine is walking the righteous path. However, Johnny picks up the revolver Valentine used earlier on Gyro and tosses it toward Valentine, daring him to pick up the unloaded weapon as a test to whether Valentine will try to betray him with a surprise attack or not. He announces that if Valentine is able to pick up the gun in his hand, Johnny will trust him fully and allow their battle to come to an end.

Valentine approaches the revolver, but hesitates, withdrawing to deilver a short speech: that his actions and intentions are on the side of clear justice. Suddenly, it is revealed that Valentine has a gun from a parallel world hidden in the back of his coat, which he instead pulls out, sending D4C to attack Johnny. As the previous gun floats up to merge with its parallel counterpart, both men fire at each other. While Valentine succesfully lands a couple of bullets in Johnny, the power and accuracy of Johnny's fired nails connect with Valentine's vitals, rendering him unable to continue attacking.

As Valentine's guns fall to the ground, a voice calls out to Johnny. He looks up and sees the spirit of his deceased friend, Gyro, floating towards the sky. Gyro tells Johnny to keep the secret of his real name, before flying up and disappearing with a farewell. Johnny reaches out, apologising to his friend in regret of not being able to bring him back, and says his own final goodbyes. Johnny then shoots a final nail towards Valentine, piercing the president in the head, dragging his body underground by the Golden Spin until nothing but his handkerchief remains, which too eventually disappears. With Funny Valentine dead and the Saint's Corpse fully separated from an unharmed Lucy Steel, Johnny finally allows himself a loud and emotional cry of sorrow.