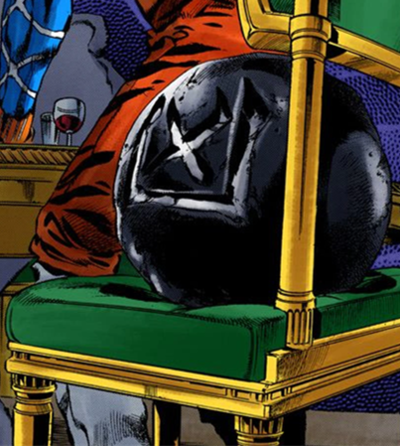 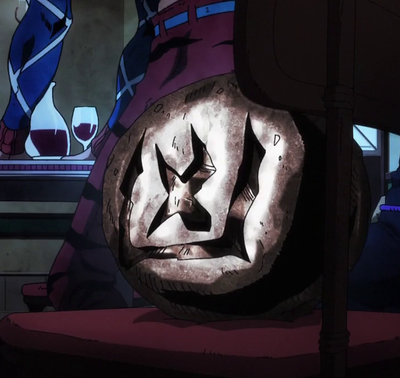 Destructive Power
∅
Speed
B
Range
A
Stamina
A
Precision
E
Developmental Potential
∅
A
B
C
D
E
A: Very Good
B: Good
C: Average
D: Poor
E: Very Poor
“
This stone moves with no regard to my will. It's been like this ever since I was a kid... It has a power that I can do nothing to resist.
”
—Scolippi, Chapter 592: Sleeping Slaves, Part 3

Rolling Stones (ローリング・ストーン(ズ), Rōringu Sutōn(zu)) is the Stand of Scolippi featured in the fifth part of the JoJo's Bizarre Adventure series, Vento Aureo.

As its name suggests, Rolling Stones takes on the appearance of a spherical rock. It will predict the nearby death of someone in the vicinity and automatically follow them; once touched, it will kill the victim in a peaceful way. 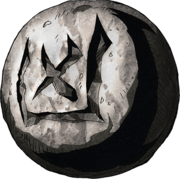 Rolling Stones usually manifests as a spherical rock crudely carved with the character, kyō (凶, meaning "ominous", "misfortune", or "bad luck"). When Rolling Stones is touched by someone who isn't a target, sentences such as Please kill me (オレヲ殺シテクレ, Ore wo koroshite kure) can form on their skin.[2]

When Rolling Stones targets a victim, it'll gradually change appearance to resemble them in their dying moments; even the dust remains of Rolling Stones molds itself in the image of the victim.

It is visible to ordinary humans, as an eyewitness reported seeing a woman holding it as she jumped down a building to her death.[3]

Rolling Stones spots a target fated to die soon and then begins to automatically stalk it.[3] Rolling Stones follows a chosen person whose death is close, appearing and disappearing[2] or even moving by itself[4] until it touches the target. In truth, it can enter the ground and walls to move unnoticed.[4]

As it follows the target, Rolling Stones gradually breaks down until the form of the target appears on it.[2] More precisely, it shows a presentation of the target dying, exposing how they are fated to die, regardless of how close or far away the date of death is. When the target touches the stone, they will die, peacefully and without visible damage, as to "spare" them the pain.[5]

When someone not targeted by Rolling Stones touches it, several words or sentences such as Please kill me (オレヲ殺シテクレ, Ore wo koroshite kure) appear on their skin.[2]