A Letter from the Past, Part 1 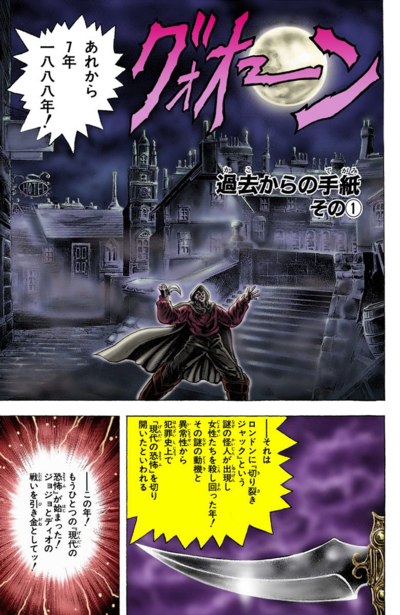 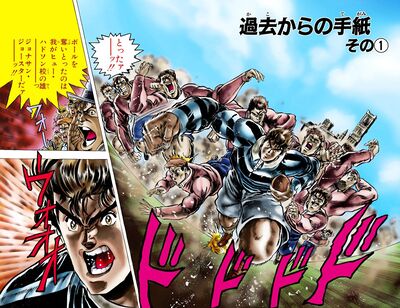 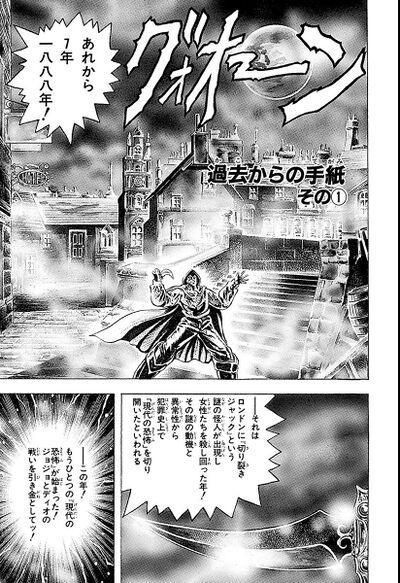 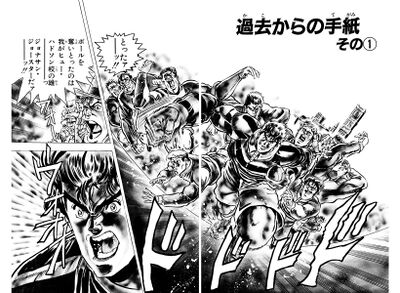 Seven years have passed since Dio came to the Joestar mansion, and in 1888 the mysterious Jack the Ripper has begun his murders. Elsewhere, a new battle between Jonathan and Dio begins.

A rugby match takes place at Hugh Hudson Academy, and the team hero is none other than Jonathan Joestar. He runs with the ball and does not stop even as several members of the opposing team try to tackle him. Jonathan drags them all with him towards the goal until a fourth player finally unbalances him. With that, Jonathan passes the ball to Dio, who is able to score and win the final match before their graduation. Dio is graduating as the top law student, while Jonathan has written a thesis, intending to pursue a career in archeology. Jonathan notices that Dio is referring to George as "Father" instead of "Lord Joestar", as he used to call him; he wonders at what point that change occurred. While the two of them appear to be close, Jonathan unnervingly admits that he still cannot feel any real friendship towards his adopted brother. The reality of the situation is that Dio has been only acting favorably to leave a good impression on others before he reaches the legal age to gain the Joestar fortune.

Back at the Joestar Mansion, George is sick and in bed. What first appeared to be nothing but a common cold has developed into a harsher, unknown illness. Despite his condition, George congratulates Jonathan and Dio on their rugby victory and is very proud of his two sons and their accomplishments.

That night Jonathan performs an experiment, he pricks his left index finger with a knife, dripping his blood onto the Stone Mask. Exactly as it did seven years ago, talons sprout from the Mask, but it soon reverts to its normal state. While looking through some books, Jonathan accidentally knocks over a case. Inside the case is a letter sent by Dario Brando seven years ago, while on his death bed. To his shock, Jonathan realizes that the symptoms of the fatal sickness that Dario described are identical to those that are currently afflicting George. Jonathan plans to confront Dio concerning this revelation.

Author's Note
“
This week's chapter is partly in color. Even after catching a cold, I'm still going into work and drawing with full enthusiasm. Please, let me know what you think!!
”
—Hirohiko Araki
“
今週は。風邪をひきながらも、気合いを入れて描きました。ぜひ感想陶かせて!!
”
—Hirohiko Araki