The Three from a Faraway Land, Part 1 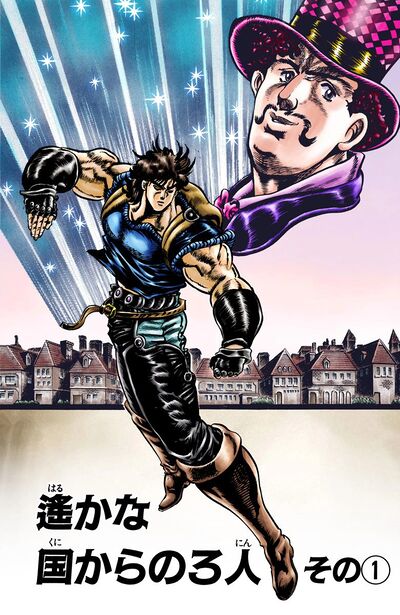 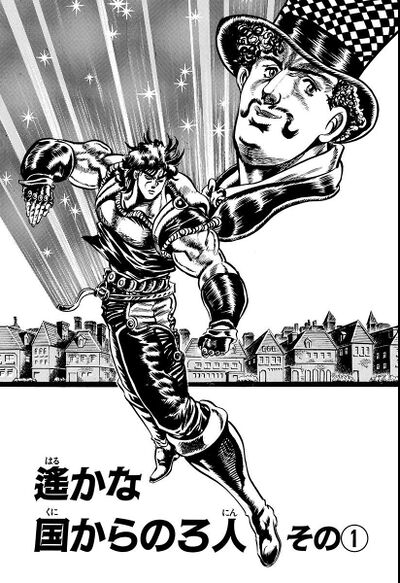 After Tarkus' demise, Speedwagon notices Jonathan's expressions have become more serious after Zeppeli's death. To get their minds off of it, he brings up the fact that Dio's zombie army is currently destroying Windknight's Lot, and they should hurry.

While walking toward Windknight's again, Poco notices his friend Adams, a familiar face from Windknights. Adams recognizes Poco and starts scolding him for being out so late. When Poco asks about his sister, Adams says that she is fine, but she is angry at Poco for staying out late again. Speedwagon concludes that the city must be fine, at least from Adams' perspective. However, as the group passes Adams, he twists his head around and shoots his tongue at Poco. Jonathan grabs it without looking and slams Adams into the ground, realizing that the city must be full of the undead by now. A mysterious figure approaches Jonathan and confirms his fears, saying that zombies have surrounded the city.

The stranger introduces himself as Dire and suddenly jumps at Jonathan with a slow-moving kick using both of his legs. Jonathan simply pulls the legs apart to counter this, but Dire continues with his technique, the "Thunder Split Attack". Jonathan counters this as well by head-butting Dire's face.

Amazed at his display of rashness, Dire stops the fight and tells Jonathan that he is not a zombie and was merely testing the abilities Jonathan had learned from Zeppeli. Jonathan asks Dire how he knows Zeppeli, and Dire points out that he put a letter on Jonathan's shoulder. Jonathan finds out that the letter was from Zeppeli, and another two figures appear. One tells Jonathan that the letter explained the whereabouts of the Stone Mask and who currently holds it. Dire introduces the first stranger, his Ripple master, Tonpetty, who was Zeppeli's teacher as well. The second stranger introduces himself as Straizo.

After they are introduced, Tonpetty inquires about Zeppeli. Jonathan tells Tonpetty about his quest and travels. Tonpetty is not surprised at Zeppeli's death and says that even if he, Dire, and Straizo had joined them earlier, it would not have made a difference. Nevertheless, Tonpetty and his students join Jonathan in their common goal to destroy the Stone Mask and Dio.

(Cover only)
Will Anthonio Zeppeli