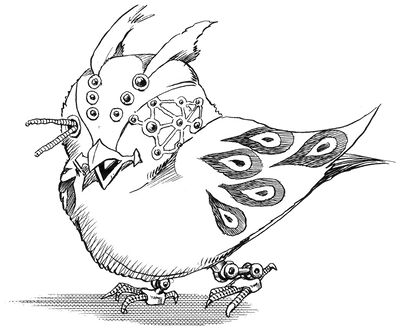 Destructive Power
E
Speed
A
Range
A
Stamina
A
Precision
E
Developmental Potential
E
A
B
C
D
E
A: Very Good
B: Good
C: Average
D: Poor
E: Very Poor
“
Nightbird Flying is long ranged and does whatever it wants, so I don't know exactly what happened, but I only felt one or two of them die. At least one of them definitely survived.
”
—Angelica Attanasio, Purple Haze Feedback Chapter 6: fantasia siciliana

Nightbird Flying (ナイトバード・フライング, Naitobādo Furaingu) is the Stand of Angelica Attanasio featured in the light novel Purple Haze Feedback. It is a small bird-like Stand that can induce the effects of withdrawal in a zone around it.

Approximately 20 cm (7.9 in) in length, the Stand is indistinguishable from a real bird from afar. Sporting multiple eyes in a spider-like fashion on it head from the center to the left eye-socket, from its right eye-socket grow two tentacle-like earthworms. Its small legs are robotic in appearance.

Despite showing no trace of personality, Nightbird Flying has some sort of autopilot, as it is usually flying around seeking the warmth of other people.

Nightbird Flying has the appearance of a small bird, and consequently doesn't fight directly. However it is fast enough to catch up to a helicopter flying at 250 km/h (160 mph).

Nightbird Flying has the ability to track individual souls.[1] Whomever it tracks will gain the symptoms of a fatal drug addiction. The target will remember who they are, but the addiction will render the rest of their memories incomprehensible. Reflecting Angelica's drug addiction, it can manipulate its targets with hallucinations, and render them powerless by impairing their intelligence and decision-making capability.[2] The ability only comes into effect if the target is within range. In addition, the degree of the effect is inversely proportional to the distance between the main body and the Stand.