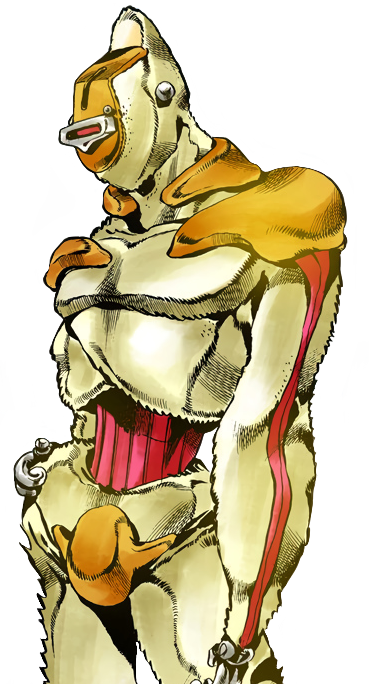 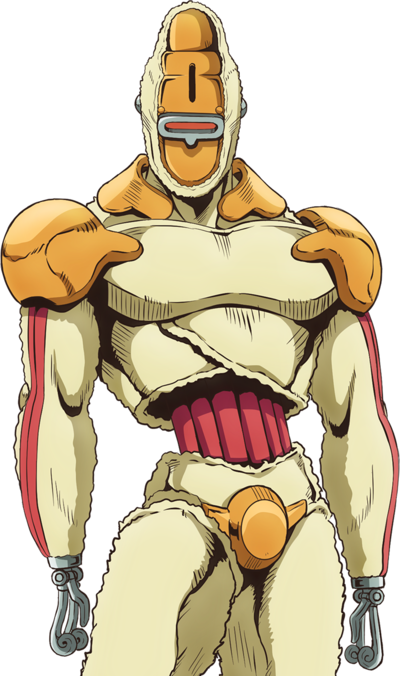 Destructive Power
E
Speed
A
Range
A
Stamina
A
Precision
A
Developmental Potential
C
A
B
C
D
E
A: Very Good
B: Good
C: Average
D: Poor
E: Very Poor
“
Ermes knows that in her heart she's in debt, I am just here to collect that debt. That is my ability.
”
—Marilyn Manson, SO Chapter 37: Marilyn Manson, the Debt Collector, Part 4

Marilyn Manson (取り立て人 マリリン・マンソン, Toritatenin Maririn Manson, lit. Marilyn Manson, the Debt Collector) is the Stand granted to Miraschon via a Stand DISC by Enrico Pucci, featured in the sixth part of JoJo's Bizarre Adventure, Stone Ocean. Appearing as a humanoid coated in fur but with mechanical parts, Marilyn Manson serves as a judge for Miraschon's bet, automatically detecting when the opposition cheats and taking away the payment.

Marilyn Manson is a humanoid Stand of average height and masculine build made to look like a creepy debt collector.[1] A majority of its body is covered in a fur-like material. It wears a welding mask,[1] and the middle of its forehead bears a small vertical slot, with a digital counter crosses the middle of its face. Its hands are small, metallic hooks or pincers of four fingers.

The Stand typically phases in and out of people's shadows.[2]

Marilyn Manson possesses no real personality, as it primarily acts to explain its purpose and ability to the victim whenever it manifests. It will forcibly take whatever is necessary to pay off their debt and explain its worth. The Stand can still be communicated with however, shown with Jolyne Cujoh arranging a new bet to save Ermes Costello.

Marilyn Manson, like its user Miraschon, has a habit of declaring "Good!" whenever the opponent confirms a wager.

Marilyn Manson is a Stand revolving around games and bets. Although it needs the User and the victim to agree on betting with each other and will not even protect its User, Marilyn Manson is invincible when it reaps its victims' debts.

The only surefire way to get rid of Marilyn Manson is to force the user to cancel it.

After the User and a potential victim bet on something and the victim loses, Marilyn Manson comes to collect the wager or anything equivalent.[3]

Like Osiris and Atum, Marilyn Manson activates after Miraschon or even itself[2] makes a bet with someone. If the person with whom Miraschon bets with loses, Marilyn Manson materializes near them and proceeds to take from them any possession of value in order to pay up.

Money directly flies into Marilyn Manson's hooks, but it can also mutilate the victim to take valuable body parts to sell to the black market, like gold teeth or their liver. It thinks by itself of what to collect in order to have the equivalent of the wager[3] but refuses to collect anything that doesn't rightfully belong to the victim like stolen money, knowing this thanks to its ability to read the victim's mind.[2]

Marilyn Manson claims that it is merely the "shadow within the loser's heart", who has recognized even slightly their loss, and therefore it cannot be attacked either by the loser or any ally. Hits simply phase through Marilyn Manson. It has been described in its stats as the victim acknowledging their fault and being unconsciously unable to defend themselves against what they recognize as a "legitimate" debt collection.[2] Likewise, Marilyn Manson can overpower a Stand User who thinks of attacking Miraschon directly.

The anime features a different resolution to the battle against Marilyn Manson.[5] Instead of forcing Miraschon herself to cancel the attack, Jolyne finds a loophole in the terms of their bet. The Stand recognizes it as legitimate, recalling itself, returning all the collected items and allowing the bet to continue unimpeded.