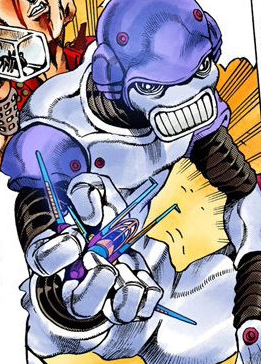 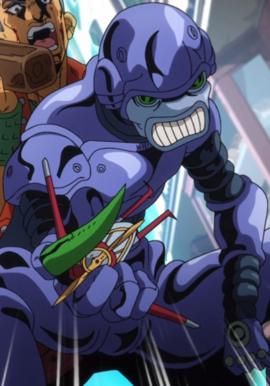 Destructive Power
D
Speed
B
Range
E
Persistence
A
Precision
D
Developmental Potential
C
A
B
C
D
E
A: Very Good
B: Good
C: Average
D: Poor
E: Very Poor
“
I shrank myself! That's my ability... Little Feet! That's a real shame... The other guys say it's worthless... heh, heh, heh... Well, whether it's worthless or worth-ful is all up to how you use it...
”
—Formaggio about his Stand, Chapter 471

Little Feet (リトル・フィート, Ritoru Fīto) is the Stand of Formaggio featured in Vento Aureo. Once an object or living thing is cut by its sharp index finger, it will begin to gradually shrink over time. Its shrinking ability can also be used on Formaggio himself without needing an injury, and takes effect immediately. 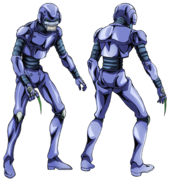 Its design is based on XB2 from Enki Bilal

With mediocre physical capability (except for its speed and durability) and an underwhelming power of slowly shrinking people, Little Feet is defined as an overall weak Stand that even Formaggio's companions at La Squadra Esecuzioni sneer at.[4]

Little Feet can shrink any person or object by cutting them with its long and sharp index finger.[4]

The cut target will gradually shrink over time along with their clothes, any item they carry, and their possible Stand.[5] The shrinking is gradual and slow,[4] and Formaggio states it would take several minutes to reduce the normally 1.70m high Narancia to around 8 cm,[6] and it occurs no matter how far away Little Feet is from the target.[7] As the victim shrinks, so does their Stand's power to the point where they become harmless to Formaggio.[8] If the victim abandons an item while shrinking, the Stand's effect on this item will cease.[4]

While Little Feet cannot speed up the shrinking, it can freely stop it or return a shrunken item to its normal size, in which case the reversal is instantaneous and violent, a pen returned to normal growing with enough force to impale Narancia's palm.[6]

Conversely, Little Feet can freely control Formaggio's and its own size; in addition, the shrinking and subsequent return to normal are instantaneous. It allows Formaggio to easily sneak around[9] and evade attacks aimed at him,[4] but he is obviously physically limited and very vulnerable when shrunken.[6][10]