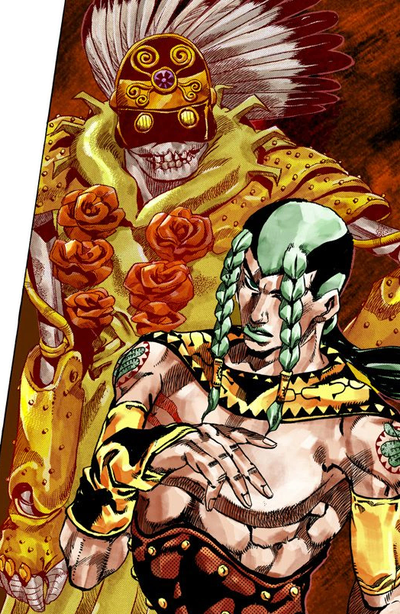 In a Silent Way (イン・ア・サイレント・ウェイ, In A Sairento Wei) is the Stand of Sandman, featured in the seventh part of JoJo's Bizarre Adventure, Steel Ball Run. It is a humanoid Stand with a tribal theme that allows Sandman to create constructs out of sounds.

In a Silent Way is a humanoid Stand, decorated in an assortment of references to the art of the indigenous peoples of the Americas, including a war bonnet and a head/face resembling the Mosaic mask of Tezcatlipoca.[1] Its arms and torso bear small, evenly spaced studs/bumps, and it wears two columns of two or three roses on its chest.

The series is known for alternating colors between media, the information presented below may or may not be canon.
Body(Gray skull and skin)
War Bonnet
(Golden with a purple jewel, and white and black feathers.)
Outfit
(Yellow robes coated in red roses, orange and gray armor.) 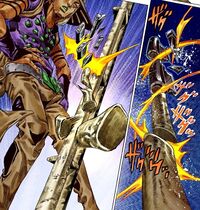 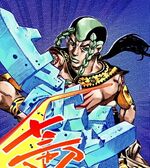 These sound effects are similar in appearance to Japanese kana. 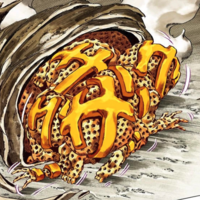