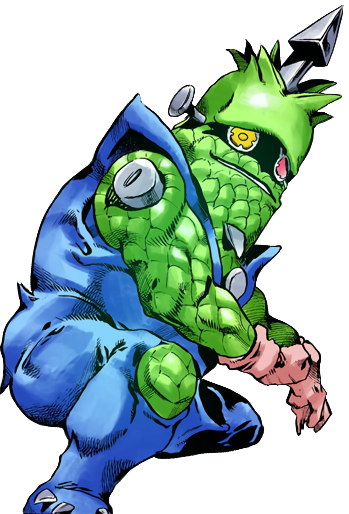 It is an invulnerable Automatic Sentient Stand that, once ordered by the user, uses saliva to dissolve parts of its target. However, if more than one person is observing it, the Stand acts like a loyal servant and follows every command. 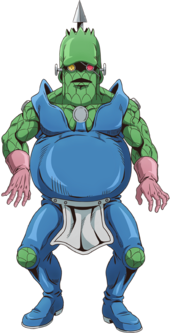 Yo-Yo Ma is an Automatic Stand characterized by its high range, autonomy, and resilience, allowing D an G to sic it on Jolyne Cujoh and wait from afar until Yo-Yo Ma kills her with its saliva. Yo-Yo Ma is shown capable of consuming and holding objects without harming them.[5] Yo-Yo Ma also secretes a repulsive stench when an object is attempted to be retrieved from its stomach, such as when Diver Down was used in an attempt to remove The Green Baby from Yo-Yo Ma's stomach.[5] In addition, Yo-Yo Ma can store and carry a variety of miscellaneous objects in its pockets.[2] Yo-Yo Ma is shown to be near indestructible, taking six shots from a pistol, getting punched multiple times by Stone Free without taking any damage,[3] and wasn't even killed when disabled by Narciso Anasui with the user instead being beaten.

As an automatic Stand, Yo-Yo Ma is given broad instructions by its user and will fulfill them the best it can. The particular trigger for its attack is when its victims are distracted and stop watching it but as long as more than one person looks at it, then it'll keep acting subservient and obey any command.[6] The spike on its head is actually the sensor that allows it to automatically detect when its targets are distracted[7] and it can be sabotaged with the right power. Thus, Anasui connected Yo-Yo Ma's sensor with the brain of a frog via Diver Down so that Yo-Yo Ma would be constantly distracted by the instincts of the frog.

Yo-Yo Ma is an intelligent autonomous Stand able to converse with others.

Unlike most automatic Stands, Yo-Yo Ma possesses a high degree of intellect. It knows a fair deal about survival in the swamps, knows how to pilot a hovercraft, and can craft miscellaneous useless items out of junk, like a chair out of twigs.[3] The only instructions it receives are general goals to achieve such as killing its target and retrieving the Green Baby. It is then free to act as it pleases and will dispose of any person in its way.[2]

On the surface, Yo-Yo Ma appears as a harmless and surprisingly helpful Stand. However, when it is not being watched by more than one person, Yo-Yo Ma can produce an acidic saliva or drool, which it uses to dissolve parts of its targets body.

It is able to dissolve whole chunks of flesh without causing pain or blood loss. The dissolution of flesh is completely silent and abrupt, capable of destroying Foo Fighters's jaw in an instant. It has multiple ways of dispersing its saliva, such as inserting it into the bodies of biting mosquitoes and mixing it with water in front of a moving boat to cause it to splash those on-board.[5] It can even position vinyl strips so that they rub against the propellers of an airboat and generate static electricity, which will make its spit waft in the air.[2] Humans are seemingly the only beings that are affected by its saliva, allowing it to use mosquitoes to spread it.