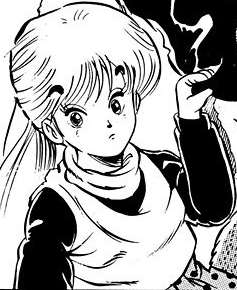 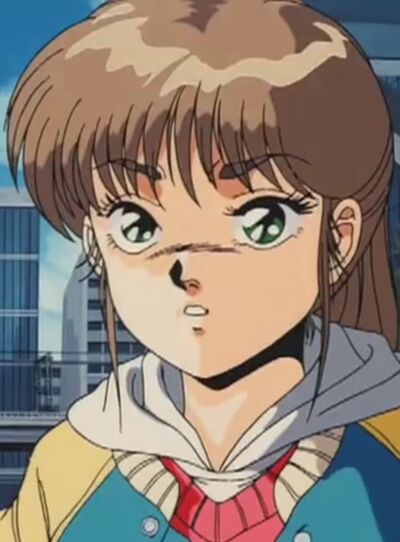 Baoh (OVA)
“
If I get separated from you, Dress will take me back and brainwash me! And besides... I like you, so... let's go together.
”
—Sumire to Ikuro Hashizawa, Baoh Chapter 2: The Extermination Order!

Sumire (スミレ, Sumire) is a primary ally featured in Baoh the Visitor. She is a young girl with psychic abilities which Dress seeks to exploit for their own gain.

Sumire is a young girl with light hair tied in a ponytail. Sumire has big oval eyes with long eyelashes, fitting her youth, and also thick eyebrows.

Sumire loosely wears a plain light dress over a dark shirt, and sneakers.

The series is known for alternating colors between media, the information presented below may or may not be canon.
Skin(Fair)
Hair(Light brown)
Eyes(Green)
Outfit
(Blue & yellow vest with white hood, orange skirt and gloves, black tights, pink undershirt, hairband and socks)

Sumire can be summed up as a bright but impertinent little girl.

Sumire is remarkably clever for two reasons. The first is her natural resourcefulness; for instance she was able to use the items in her cell to make an elaborate trap and trick Sophine and she is proactive in acting out plans for her and Ikuro to make money. The second reason is that her psychic powers give her an edge in foreseeing dangers and predict the next best course of action. Her strong intuition allowed her to figure out that she was being drugged but also that Ikuro was a trustworthy partner.

Sumire is also quite rude and has little respect of authority. She is remarkably impertinent to adults she doesn't like, notably Sophine who was her handler but also the old man who she insulted repeatedly. Perhaps because of her youth, Sumire is also indifferent to the law and doesn't hesitate to steal or cheat at gambling, excusing it by the urgency of her situation. However, Sumire has a soft heart and wept when a women and her child were murdered by one of Dress' monsters.

Sumire shows a great deal of determination against Dress. She is consistently defiant against them and whenever she is captured makes it a point to escape or make her captors' life hell, but could also endure the torture of being exposed to deafening sound for hours without screaming.

While she likes her pet Nozzo, she is also disgusted at Nozzo for licking her face after eating bugs.

Sumire seems to have a crush on Ikuro Hashizawa due to his looks and her knowledge of his good heart. Even seven years after Ikuro's disappearance, Sumire eagerly awaits his return.

Sumire is a remarkable psychic whose powers revolve around divining relevant information. The nature of the information and the method by which she obtains it is irrelevant, but is instinctive and automatic. Sumire has manifested her divining skills in the following ways:

Before Dress captured Sumire, it is explained that she used to live in an orphanage. She openly manifested her psychic powers when she divined the license number of a car involved in a hit-and-run for the police, catching the attention of Dress who took her in and put her on a train to their secret laboratory. Incidentally, a Baoh was being contained in another wagon.

At the beginning of the story, Sumire tries to escape the train. Waiting for her handler Sophine to eventually check on her, Sumire makes a mess to hide a trap. Sophine comes and Sumire asks her to activate the ventilator, which turns and causes a rope to bind Sophine. Sumire exits her room and tries to escape Sophine. She is caught when she reaches a wagon where a special weapon is contained. In the struggle, Sumire turns a valve that causes a failure of the containment system, releasing the Baoh. Sumire exploits the commotion to detach the back cars from the lead cars and get away, but is soon joined by Baoh, in reality a teenage boy named Ikuro Hashizawa.

Afterward, Sumire decides to stick by Ikuro, trusting him and having a crush on him too. When the pair are attacked by a knife wielding assassin, she warns him of the incoming threat and subsequently flees with him on a motorbike. When they arrive to a gas station, Ikuro is ambushed by the same assassin and seemingly killed. Witnessing the murder, Sumire faints from the shock, but Baoh manifests itself and kills the assassin. He returns to normal before Sumire wakes up. Later, Sumire and Ikuro cheat at horse races, using her power to predict which horse will win. The pair take refuge in an abandoned building but are soon attacked by a death squad sent by Dress. She faints again, missing Ikuro's second transformation and massacre of the squad but is woken up by Nozzo, allowing her to see the aftermath of the battle. She then witnesses Baoh's fight against another assassin and his pet monster Martin. When Ikuro gets cornered, she tries to stop the assassin but gets whipped for her trouble and the pain Baoh senses allows him to overpower the assassin's tricks. Ikuro then returns to his human form.

Later, Sumire and Ikuro take refuge at an old couple's house in the countryside. In here, they are attacked by another assassin named Dordo, a cyborg who can also command bats. Dorudo is beaten but he escapes and takes Sumire with him as a hostage and a bait to lure Ikuro to Dress' laboratory. In here, Sumire is tested for her psychic powers but resists. Dr. Kasuminome decides to torture her so that Baoh is lured in by her pain. Sumire is eventually freed by Baoh, but a powerful psychic named Walken intervenes, destroying the floor and sending them down a cavern. In the cavern, Baoh points the way out to Sumire, leaving her to battle Walken. Sumire has no choice but to abandon Baoh.

Years later, it is shown that Sumire was subsequently adopted by the old couple. Sumire impatiently waits for the day Ikuro will awaken from his slumber and get out of the sea.