THE WORLD ( , Za Wārudo) is the Stand of Diego Brando from a Parallel World, featured in the seventh part of the JoJo's Bizarre Adventure series, Steel Ball Run.

An alternate version of the original continuity's The World, it appears alongside its user during his confrontation with Johnny Joestar in the High Voltage arc. Much like its original version, THE WORLD can stop time.

THE WORLD is a humanoid Stand with a build similar to Diego's. Its design is based off of its alternate counterpart, particularly the newer version portrayed in JOJO A-GO!GO!.[1] It wears a headpiece covering its face to below the place of its nose, slanting at a steep angle from the base of its forehead to a peak situated above the rear of its head by about half its height, leaving the face of an inverted triangle visible to the front; somewhat similar to the Red Crown of Lower Egypt.

On its back are twin diving cylinders, connected via short twin ridged cables to the rear of its mask; perhaps secured by thick, ridged or puffed straps running from the rear of its waist over both its shoulders to its front. The back of its hands bears the shape of a clock with similar emblems on both its shoulders and hips. Its chin and belt region are decorated with hearts, while its knees are capped with D-shaped pads. 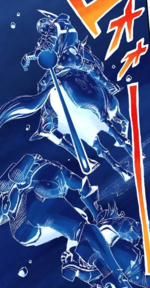 Inherent in most short-range Stands, THE WORLD demonstrates an above-average attack strength, delivering strikes powerful enough to cleave through its own limbs and presumably eliminate enemies with a single punch. Its range of manifestation is at least a couple meters, as it separated from Diego at one point to deliver a pincer attack.[2]

As described by Diego, THE WORLD possesses the ability to stop time, allowing only itself and its user to act within the stopped time.[3]

The maximum duration of the ability is approximately 5 seconds. During this period, objects that were thrown by THE WORLD or its user will eventually stop in midair and once time resumes, will continue traveling at the velocity they were thrown at.[4]

Diego prefers to use his power to set up traps against Johnny rather than killing him directly, although it may be due to the danger of approaching Tusk ACT4, which has some level of influence even during Time Stop, due to the infinite and gravity-defying nature of its ability.[5]