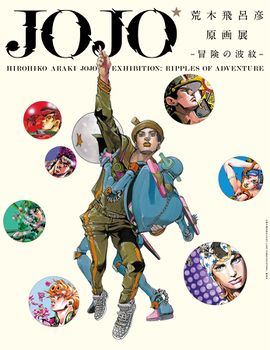 Hirohiko Araki JoJo Exhibition: Ripples of Adventure (荒木飛呂彦原画展 JOJO 冒険の波紋, Araki Hirohiko Genga-ten JoJo Bōken no Hamon) is a special exhibition that was originally held from August 24 to October 1, 2018 at the The National Art Center, Tokyo

A second venue was opened in Osaka

from November 24 to January 14, 2019.[1] Another venue was held in Nagasaki[2] from January 25 to March 29 and a venue in Kanazawa[3] was initially announed to be held from April 25 to May 23. However, the Kanazawa venue was reported to an ulterior date due to health concerns about the COVID-19 pandemic

Araki at the exhibition 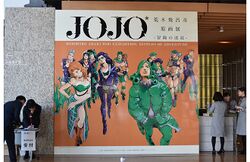 The event encompassed the entirety of JoJo's Bizarre Adventure's history and acted as a culmination of its 30 years of publication. Featuring original artwork from Araki, both old and new, the exhibition hall utilized various technologies to create the "largest displays in the history of the JoJo manga series."

This is the second time The National Art Center, Tokyo (Japan's largest museum) has held a personal exhibition for a Japanese manga artist, the first being Osamu Tezuka

In the press conference of this event held on June 21, 2018, a anime adaptation for Vento Aureo was revealed.

The exposition featured about 200 exhibits and 280 original drawings disposed into several different named spaces. New works of art such as sculptures by Motohiko Otani and Kunihiko Morinaga as well as a display by the visual design group WOW were displayed alongside Araki's drawings and paintings.

One of the key features of the exposition is a series of twelve canvas 2 meters high and 1.2 meters wide featuring several nearly life-sized characters disposed in a U shape to surround the visitors. The disposition aimed to put the characters in the same space as the visitors. Its name and theme is "There is always a traitor".

In the event were sold a lot of different merchandise (keychains, wall posters, stickers, office material...) including the catalog HIROHIKO ARAKI JOJO EXHIBITION RIPPLES OF ADVENTURE with illustrations and manga panels.

“
It is a very great honor for me to show the compilation of JoJo's 30th anniversary to everyone at the honorary place. At the same time, I am also feeling nervous. What I have tried to draw in the JoJo series is 'Growth of the Spirits' through all the phenomena in this universe and the battles between the good and evil. This exhibition will feature images of the characters and their guardian gods gathering together at the same time and place. In addition, I am planning to offer some new drawings. Please look forward to the next summer.[5]
”
—Hirohiko Araki