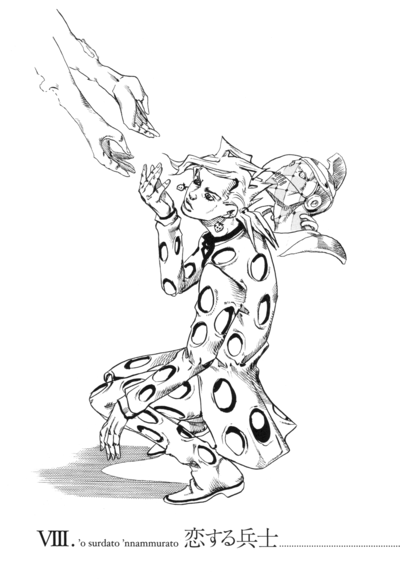 Ⅷ．'o surdato 'nnammurato (恋する兵士, Koisuru heishi, lit. The Soldier in Love[a]) is the eighth and final chapter of Purple Haze Feedback, a light novel based on the JoJo's Bizarre Adventure series.

Fugo once again reminisces about Team Bucciarati. He remembers investigating Leaky Eye Luca's death which Bucciarati had to investigate, Polpo's sudden but strange suicide, Bucciarati's promotion to caporegime, and finally Giorno's first day on the team, where he first noticed the boy's potential. He also remembers how every member of the team went on to trust Bucciarati's judgement of Giorno, and their fates had been sealed the moment they decided to accompany him in his revolt against Diavolo while Fugo alone stayed behind - a decision he still could not understand.

A week later, after suffering through being unable to breathe and eat properly, a slowly recovering Fugo meets Giorno in a restaurant. With the ability of Gold Experience, Fugo's sense of smell and taste were restored and all the pain in his body disappeared. While Giorno amusedly narrates about his distaste for fowls and greasy foods as well as his mother's yakitori, Fugo interrupts him. However, Giorno tells him to call him "GioGio". Over the radio, the two of them hear Trish's cover of The Soldier in Love. Trish, who has since become a famous singing idol, thanks the people - Team Bucciarati - who has been with her during her "disappearance" in the last six months.

Fugo asks why Giorno entrusted a critical mission to him, knowing that he is a traitor. Giorno tells him that he always thought differently from his peers and this difference unconsciously infuriated him, leading to his short temper. He narrates how, on the day Fugo left, a Stand had ambushed them which was powered by the user's drive and hatred to eliminate; this Stand reminded him of Purple Haze. Even if Passione could eliminate Fugo, Purple Haze nonetheless would have released a virus to the world because of Fugo's self-hatred and Giorno needed to teach it to him without forcing it. It is revealed that the mission's true purpose was to make Fugo overcome his own fear and hatred of himself, and Giorno did not have to worry about the mission going awry because he trusted Bucciarati, who had already trusted Fugo before.

Given a photo of his old team, Fugo finally swears loyalty to Giorno.