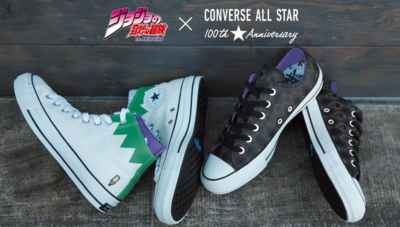 The first wave was released on May 20, 2013 featuring a new Chuck Taylor high-top showcasing a pattern of stone masks, hearts and stars from Phantom Blood as the main material of the shoe. "Phantom Blood" was embossed on the leather tongue tags and came with a stone mask keychain in a stylish yellow and orange diamond patterned box.

The second wave was released on May 20, 2014 featuring a new Chuck Taylor All-Star showcasing a pattern of kanji as the main material of the shoe with a small yellow hand sewn near the heel. Jotaro Kujo and his stand Star Platinum appear on the left and right sole inserts respectively. The main bottom of the shoe is a bubble gum pink.

The third wave was released on December 16, 2016 featuring two new Converse All Star 100's based off of Rohan Kishibe and Yoshikage Kira respectively. Rohan's shoe includes his signature green hairband around the top with his G-pen being sewn on near the heel. The opening features two layers of cloth with the left having "zukyuun" written on it and the right having "Heaven's Door". The inside also says "You can’t strike Rohan Kishibe". Kira's shoe features the pattern of his skull tie as the main material of the shoe while the insole has "Sheer Heart Attack," "Gyaru Gyaru," and "Look over here!!" printed on it.

The fourth wave will be released on March 2023 [1] featuring a new Chuck Taylor All-Star based on Jolyne Cujoh showcasing a pattern based on the “JO” buckle on her pants, her butterfly and star symbols, and the spider web pattern of her clothes. The ankle patch part is designed based on Jolyne's star-shaped birthmark. Jolyne Cujoh and her Stand Stone Free appear on the left and right sole inserts respectively. Additionally, the product comes with an acrylic charm of a butterfly, Jolyne's motif.

All four waves were purchasable through Premium Bandai and various other online retail websites.