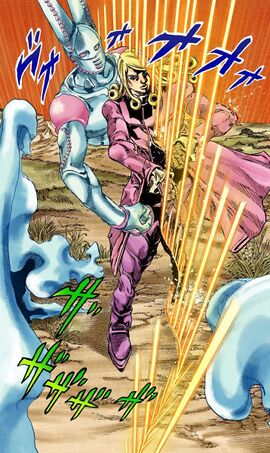 Love Train manifests itself as a gap in space that is generated from Lucy Steel. Its border with the real world is visible as it generates a wall of vertical rays of light. They are usually seen surrounding Funny and/or D4C. 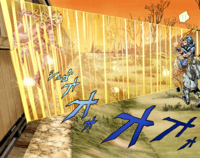 While Love Train is active, Valentine becomes effectively invincible, hiding within a pocket dimension (also described as a gap in space) delimited by a wall of light that follows him.[2][3] The wall of light, originating from Lucy's body, has the ability to redirect all misfortune that comes in Valentine's way, leaving only good fortune. The harmful energy that passes through the wall of light is sent far away from the user and is passed onto individuals anywhere on Earth as bad luck.