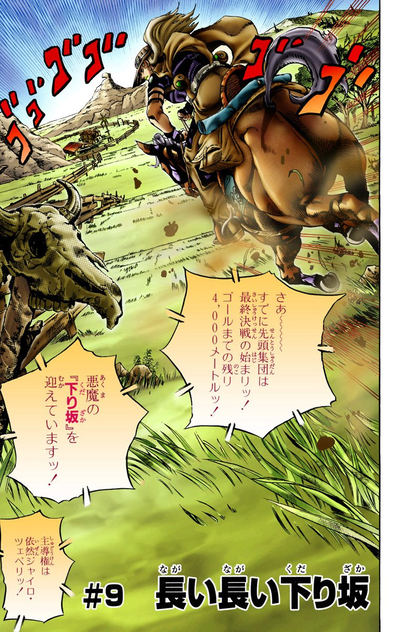 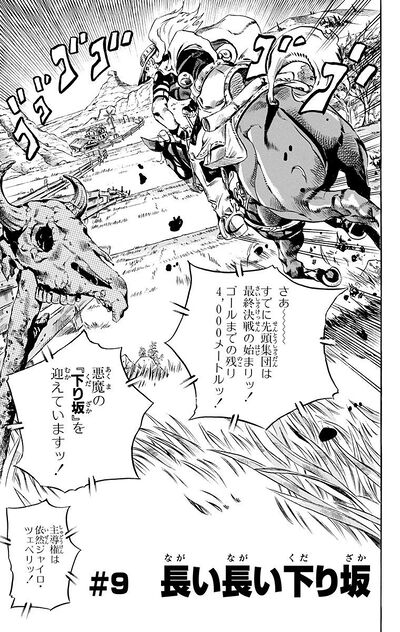 Only 4,000 meters are left until the goal: the Devil's Downhill. Gyro, in the lead, looks back to see Pocoloco following him. Gyro thinks to himself that he does not know who Pocoloco is or how he caught up, but there is no need to worry. He urges his horse to conserve strength, but maintain the lead.

The announcer points out a third racer emerging and closing in on Gyro and Pocoloco. Pocoloco, confident in his own luck, is also sure that he can endure the pace until they reach the farm. He then sees a strange figure near a fence speaking to him. At first, he takes it for a hallucination, but the figure appears behind him and tells him not to get distracted and not to hold his horse back. The figure disappears and Pocoloco sees its hand emerging from his own.

Pocoloco and Gyro exchange taunts. To everyone's surprise, Pocoloco takes the lead. Gyro wonders if Pocoloco is foolhardy or if he has a reason to be accelerating downhill. At last, Pocoloco's horse trips, and Gyro regains the lead. As he gets closer to the farm, he realizes that Pocoloco and his horse are still moving, sliding down the hill on the dead body of a cow. Gyro thinks to himself that there is no way Pocoloco can be relying solely on luck; he must have known about the cow in advance.

Realizing that by using the cow, Pocoloco's horse will enter the final stretch with its legs fully rested, Gyro pulls out a Steel Ball and throws it at a rock near Pocoloco to stop the dead cow's body from sliding. By doing so, at the same time, he causes Sandman, who was on the rock, to fall in front of the racers. Sandman lands on the track and begins to run, to the astonishment of Gyro and the announcer, who exclaims that the runner named Sandman is now gaining lead.

Author's Note
“
Cooking. Spaghetti carbonara, for example. It's very complicated. If you don't do it quickly, the eggs will clump up.
”
—Hirohiko Araki
“
料理。スパゲティーカルボナーラ。奥が深い。スゲッ手早くやらないと卵がかたまっちまうんだよね
”
—Hirohiko Araki