The Three from a Faraway Land (story arc)

The Three from a Faraway Land 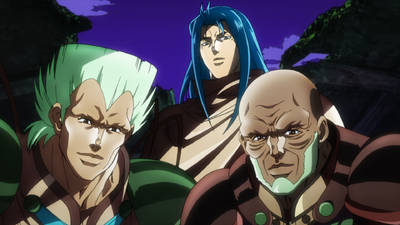 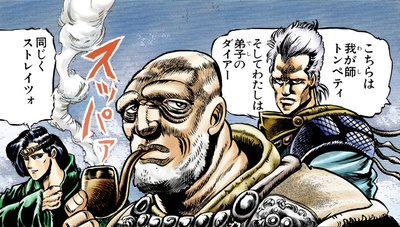 The Three from a Faraway Land (遥かな国からの3人, Harukana Kuni kara no 3nin) is the ninth story arc in Phantom Blood.

It narrates Jonathan's meeting with fellow Ripple users Dire, Straizo, and Tonpetty, then the short clash between Dire and Dio Brando.

Jonathan, Speedwagon, and Poco reach Windknight's Lot and meet Adams, one of the villagers. Adams, revealed to be a zombie, tries to attack the group from behind but is quickly defeated by Jonathan. Another man appears and immediately attacks Jonathan. Presenting himself as Dire, the attacker uses a strange technique, the "Thunder Split Attack", to spread Jonathan's arms with his leg and then use a double karate chop. However, Jonathan counters with a headbutt and repels his aggressor who interrupts their fight and presents himself as a fellow Ripple user, acquainted with Will Anthonio Zeppeli. Then come Tonpetty, Zeppeli's own mentor and Straizo, another Ripple user.[1]

Meanwhile, Dio receives in his lair a woman begging the Vampire to not harm her baby. While Dio promised the woman that he and his minions will harm the child if she willingly becomes a zombie, he muses the resulting irony as the zombified woman devours her own child. Just as Poco learns that his sister has gone out of their home to look for him, Dio is trying to charm her into joining his undead legion of her own free will. When she slaps him, Dio gives her to his minion Doobie then leaves the room. Fortunately, Jonathan's group arrives before anything grave happens and Jonathan personally kills the zombie. Jonathan eventually arrives at a gallery where he finally confronts Dio.[2]

Several zombies appear to help their master as both Jonathan and Dio exchange threats. Yet it is Dire who challenges the vampire first, explaining that as Zeppeli's closest friend, he has a right to avenge him. Dire uses a perfected version of his technique, the Thunder Cross Split Attack, but Dio freezes Dire's body and shatters it, reducing the Ripple user to a head. However, Dire's head falls into a flower pot, plucks a rose, and sends a Ripple-infused flower into Dio's right eye as a last defiant act before dying. The Vampire enrages because of the humiliation.[3]