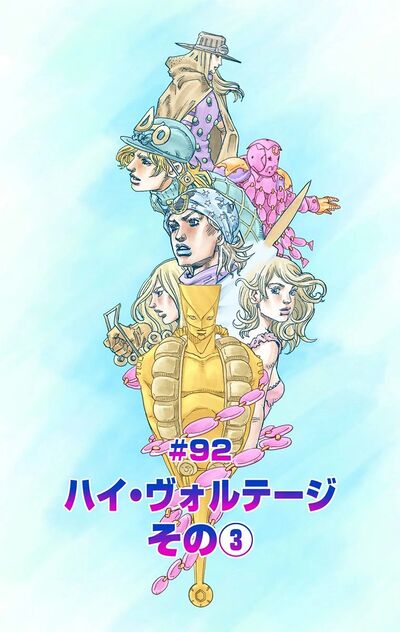 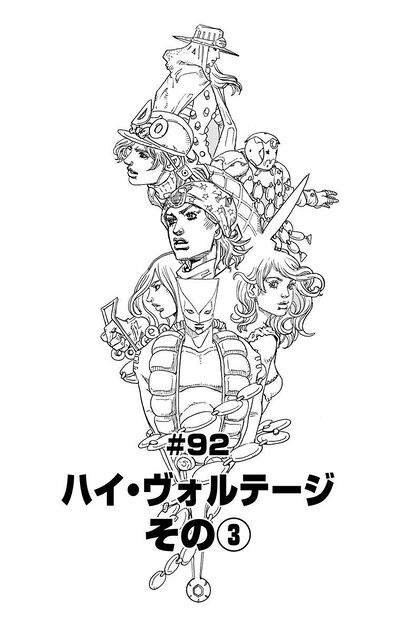 Johnny shoots his nails at the wall to escape Diego's trap. In doing so, the wire bomb's damage is reduced, but his knee is still slashed. Johnny loses balance, and while falling off his horse he shoots another nail into the wall as he tracks his enemy. While riding, Diego sees an arm coming from the wall to attack him, and he unleashes his Stand's ability. When he prepares THE WORLD to attack the arm, he discerns the real power of Tusk ACT4. The "infinite rotation" exceeds any limits, even stopped time, allowing Johnny to move his arm and Tusk to raise its head. Diego quickly moves away from Tusk, knowing that if he is touched by ACT4 he would be defeated as the president was. Diego now believes that Johnny is the greatest threat to him in this current reality. Johnny then rises with determination and restarts his assault upon Diego. Meanwhile, Steven Steel and Lucy continue to search for the corpse of Valentine. The police scour for him as well, but have difficulty given the scuttling situation.

Lucy and Steven's only option is to stand by as Johnny and Diego battle, hoping that Johnny reclaims the Saint's Corpse.

The race goes on as Johnny and Diego still fight. Johnny warily proceeds to avoid being caught by any more traps, and stays on a path where he see and attack his foe. Regardless, Diego pours a full gallon of gasoline on Johnny and draws several matches from his pockets, lighting them. Johnny is alarmed as Diego prepares to ignite the gas, but not before stopping time with THE WORLD. When time resumes, many of the lit matches make contact with Johnny, and combined with the gas, light him aflame. Johnny swiftly hails ACT4 while firing his nails. Tusk begins to spread apart the ground, opening an entry to the sewers as to extinguish the flames engulfing Johnny.