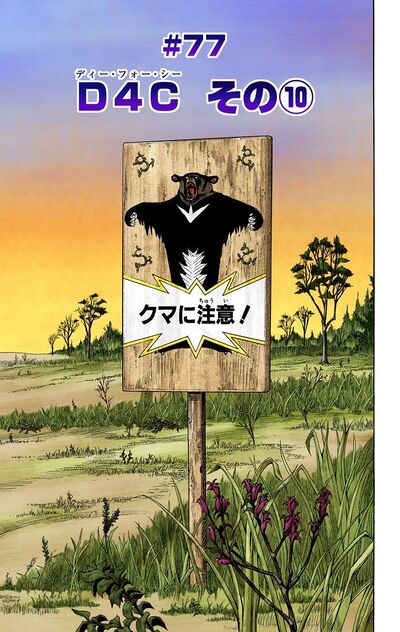 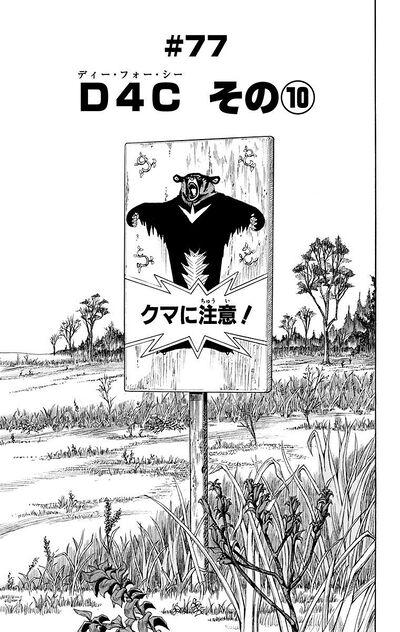 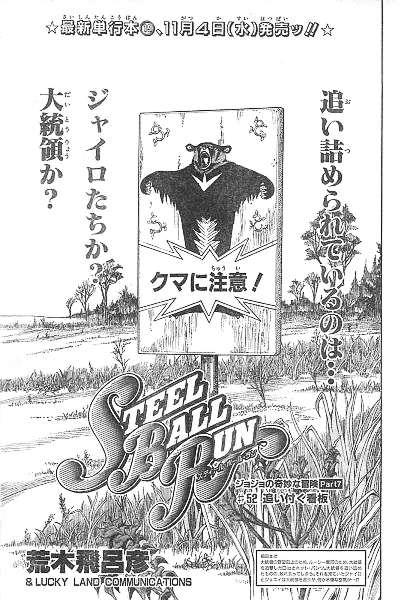 Appearing in an alternate universe, Valentine transfers his D4C to the alternate Valentine who becomes the 'base' Valentine. Valentine then travels back to the original world.

As Gyro and Johnny pursue the train, the Atlantic Ocean comes into view. The warning sign is still stalking them somehow, and Johnny shoots it down. Stopping for a moment, Johnny and Gyro notice that something is odd with the landscape, but do not expand on their observations. As the duo decides to confront the train engineer who must be operating the train, several fishes jumps out of a nearby pond and bite Gyro's finger. Gyro's wound is inconsequential so they carry on with their pursuit, but the warning sign is still following the duo.

In the train, Hot Pants sees that Lucy has transformed into the Corpse itself. Seeing that nearby insect somehow fused with the objects around them, and that the same object are fusing. It is only when she sees the furniture converging toward her that she understands that the Corpse is causing spatial distortions around itself. Valentine arrives into the lead car just in time to see Hot Pants being fused with miscellaneous objects and die when these objects reach her heart, and wonders whose power is this. Valentine realizes that everything is drawn toward Lucy, the center of the distortion.

Author's Note
“
I’m terrfied of cicadas in the summer. It’s because when I approach one, thinking, “is it dead?” it comes back to life like a zombie screeching “RARRRH.”
”
—Hirohiko Araki
“
夏、蝉が怖くて。「死んでる？」と近づくと『ギ！』ってゾンビみたいに甦るところ。
”
—Hirohiko Araki