From JoJo's Bizarre Encyclopedia - JoJo Wiki
Jump to navigation Jump to search
This page is a translated version of the page Aqua Necklace and the translation is 0% complete. 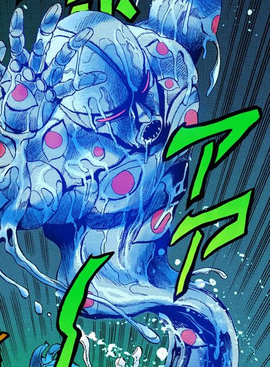 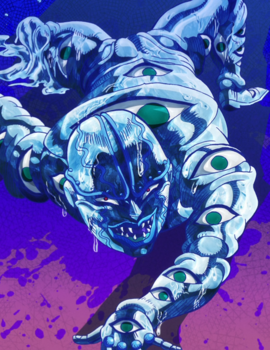 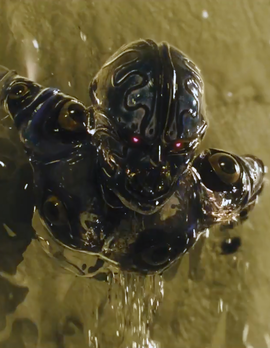 Destructive Power
C
Speed
C
Range
A
Persistence
A
Precision
C
Developmental Potential
E
A
B
C
D
E
A: Very Good
B: Good
C: Average
D: Poor
E: Very Poor
“
That one got a sharp eye. If only she or her kid from yesterday drank that milk... Then my stand 'Aqua Necklace' could have taken control of their bodies!
”
—Anjuro Katagiri, DU Chapter 4

Aqua Necklace (アクア・ネックレス（水の首飾り）, Akua Nekkuresu) is the Stand of Anjuro "Angelo" Katagiri featured in Diamond is Unbreakable. A small humanoid made of liquid, Aqua Necklace can disguise itself as any liquid substance to approach its preys. 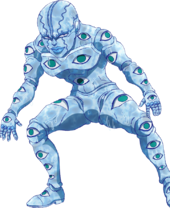 Aqua Necklace manifests itself as a short humanoid with eyes drawn through its body. Its design references the Dogū

figurines of the late Jōmon period.[2] It usually appears in a liquid form of variable size, one time as tall as a child,[3] another small enough to fit inside a flask.[4]

There has been no traces of personality shown, though Angelo will occasionally speak through it.

Befitting its aqueous nature, Aqua Necklace is generally portrayed as being blue. However the live-action movie makes it transparent.

Particularly evasive and versatile because of its liquid state, Aqua Necklace remains lethal as it still has the power to tear through someone's innards.[4] It is highly dangerous and it entering the body is practically a death warrant.

It is, however, unable to break through a rubber glove and any damage applied to it still transfers to Anjuro Katagiri who himself must remain close to command his Stand.

Aqua Necklace may disguise itself as any kind of liquid and take on their properties. It is usually water but the Stand has been shown to adopt the guise of brandy[5] or even vapor in which case he acts like a sentient cloud.[6] Because of that, it is unaffected by conventional attacks like punches and can simply reform itself.

Anjuro uses that power to trick people into drinking Aqua Necklace and then either kill them by ravaging the inside of the body[4] or use its secondary power.

Aqua Necklace is capable of possessing people from the inside to control them by easily forcing himself into the body through its victim's mouth.[3] While inside, he has control over its victim and can act through them, at one point taking someone hostage for fun.[3]