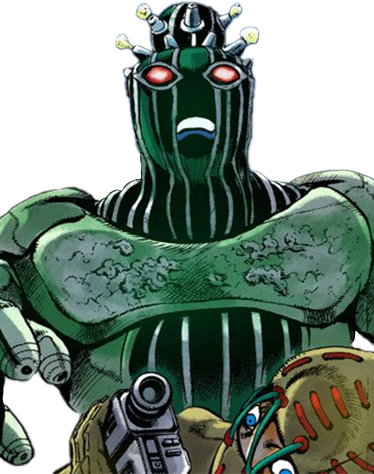 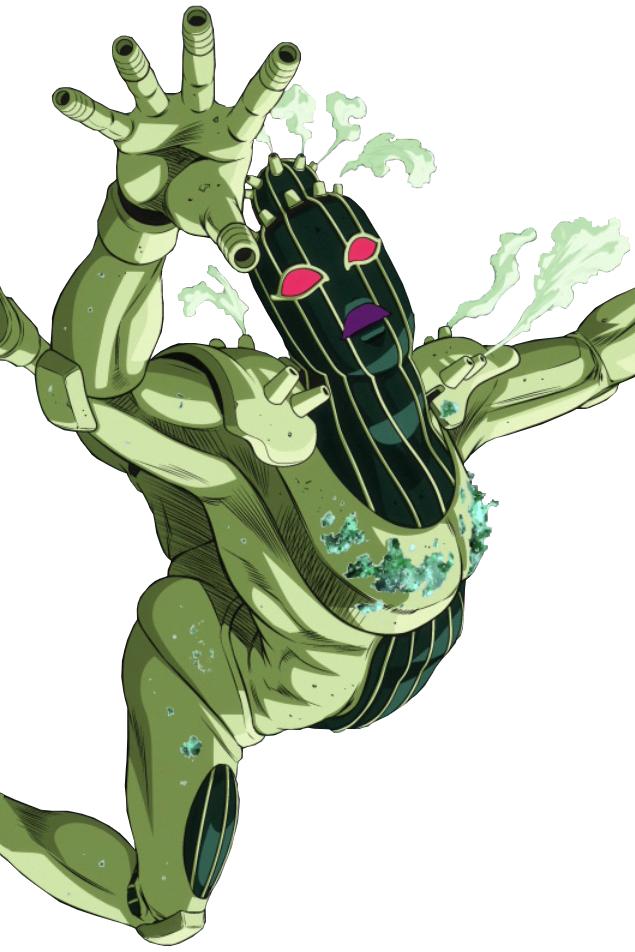 Green Day (グリーン・ディ, Gurīn Di) is the Stand of Cioccolata featured in the fifth part of the JoJo's Bizarre Adventure series, Vento Aureo.

It is a humanoid Stand that can generate and spread a deadly mold. Said mold will trigger and consume anybody whose altitude decreases.

Green Day is a tall, well-built humanoid Stand with cylinders across its shoulders, head, and fingers (three on each hand), which all release mold. Its upper body is well built, with segmented limbs and lines running from its neck to its crown, and from its waist to its chest. Its chest and back are covered in a texture of mold. Green Day's head has an appendage on top with cylinders around it that disperse mold, which is a feature of its design that Araki likes.[1] Lines run across the head through the eyes and to its crown. Its mouth is wide agape usually.

The Stand's lower body is never shown in the manga, but different media depicts it uniquely. GioGio's Bizarre Adventure depicts the lower body as a lined, slug-like foot that releases mold from cylinders on the foot. The anime adaptation depicts Green Day with segmented legs.

Green Day's mold usually resembles a mossy texture that grows on people or a smoke that disperses from its body.

Green Day doesn't display any particular personality, usually with a blank expression or sharing its user's. It is speculated by Giorno that due to Cioccolata's own sadistic personality and delight in cruelty, Green Day's ability developed to such a dangerous degree.

Green Day is an overwhelmingly deadly Stand as its mold has the potential to massacre whole cities. Although it shows enough combat ability to pummel Giorno and send him flying,[2] Cioccolata relies on trickery and the mold to fight.

Green Day's primary ability is to produce a potent mold that rots and destroys the flesh of those it infects in an instant.[3] Said mold is spread into the air through several tubes protruding from Green Day's head, shoulders, and hands.

The mold's growth is triggered when the potential victims lower their current altitude, a condition that applies even to individual limbs, forcing them to either stay immobile or go upwards.[4] If one lowers themselves, such as to pick up something or if they are on the floor, they will fall victim to the mold. The lower the altitude, the faster it spreads; a person lying on the floor can be consumed in a matter of seconds, while someone bending over may take a bit longer to die. However, the growth is stopped if the victim manages to increase their altitude before it is too late.[5]

Green Day's mold indiscriminately attacks all life forms, whether they are people, animals or plants.[2] However, things that are not living, such as Bruno Bucciarati's body after he was killed by King Crimson, are not affected.[6][7] Stands are also not affected, as Mista was able to retrieve his gun from a lower altitude using Sex Pistols.[8]

The mold rapidly spreads from corpse to corpse, thus potentially having an infinite range and could slaughter a high number of people in populated areas, as well as making its User harder to find among the corpses.[4]

Doing so allows Cioccolata to control his limbs freely, as if they were still attached to his body.[10] With this technique, Cioccolata can ambush opponents or attack them from multiple directions with his severed limbs and hide within cramped spaces.[2][11] He can also call his severed pieces back together when he needs to, restoring Cioccolata to his original form.