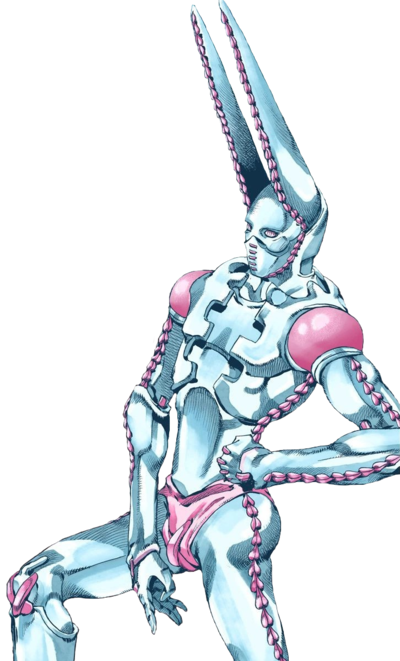 D4C has a humanoid form with large, upright horns that somewhat resemble the ears of a leporid; a masked mandible, and a light body lined by an almost unbroken seam or trim. It's designed after the image of leather being stitched together, like on a baseball.[2] Under its brow, its eyes appear to emote a cold gaze.

After a late encounter[3] with Gyro Zeppeli, along with Valentine, D4C's appearance changes drastically as a result of Valentine's rapid aging at the hands of Gyro's Stand, losing a layer of its face, including its horns. Even after Valentine recovers his health, D4C keeps its new form.

D4C is among the most powerful Stands in the series. In its default form, it is a close-range Stand with above-average strength and speed. It is able to punch a grown man away violently[4] and rivals a transformed Diego in speed.[5]

Valentine travels by being closed between two objects, shown first by putting himself between a chair and the ground.[6] Liquid materials, such as water count as objects as well,[5] and even dust or steam. Valentine only needs an infinitesimal part of himself put between two objects to be able to hop between dimensions. Following that, Valentine may reappear from anywhere, like emerging from someone's back,[4] presumably by affecting objects in a neighboring dimension. One of the early facets of this power was that Valentine was impervious to projectiles as the hit body part would transform simply into a hole, however, this was then left out after its initial usage.[7]

Valentine can also pull other people or items to other dimensions by forcing them between two objects or into the object he uses as a portal;[4] for instance he can slam a door on them while they are backed against a wall. However, as no two versions of the same person or thing can co-exist in the same dimension, one of them will have to go back into their own. If not, and if they get too close to one another, both will crumble, splitting into Menger sponges before obliteration,[8] potentially causing an explosive reaction that may harm those close by.[9] This rule does not apply to Valentine himself, and thus he can cooperate with his alternate selves. Valentine can also only partially drag people into a new dimension, immobilizing them inside an object.[4] 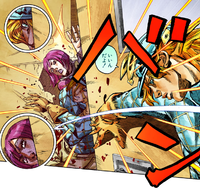 Diego Brando has demonstrated that people other than the Stand User can pull people to other dimensions if he reuses the same objects that were used to drag them between dimensions.[8]

It is explained that between dimensions, gravity as a force is able to persist with Valentine when he hops between dimensions. This keeps him from breaking into pieces and becoming scattered across the different worlds.[10]

If Funny Valentine is injured, he can hop into another dimension and transfer his D4C to that world's Valentine.[8][11] Said Valentine acquires the memory of the previous Valentine and becomes the "main" Valentine by virtue of now possessing the Stand, but his consciousness remains different from that of the previous owner. Nevertheless, since each Valentine is dedicated to gathering the Corpse Parts and has the same personality, the differences are unnoticeable. Furthermore, he can summon any number of alternate selves to a target dimension in order to outnumber his opponents.[5] These Valentines do not have D4C's of their own however, this Stand seemingly being wholly unique to the 'Base World', the single universe where the Corpse resides.[1]

Araki states that the rabbit-like design of D4C's head came about because he wanted the Stand's silhouette to be completely different from the Stands of the previous main antagonists, so he decided to give it long ears.[2]

Later, Kars gets his own enhanced copy of the Stand, known as Ultimate D4C.[12]