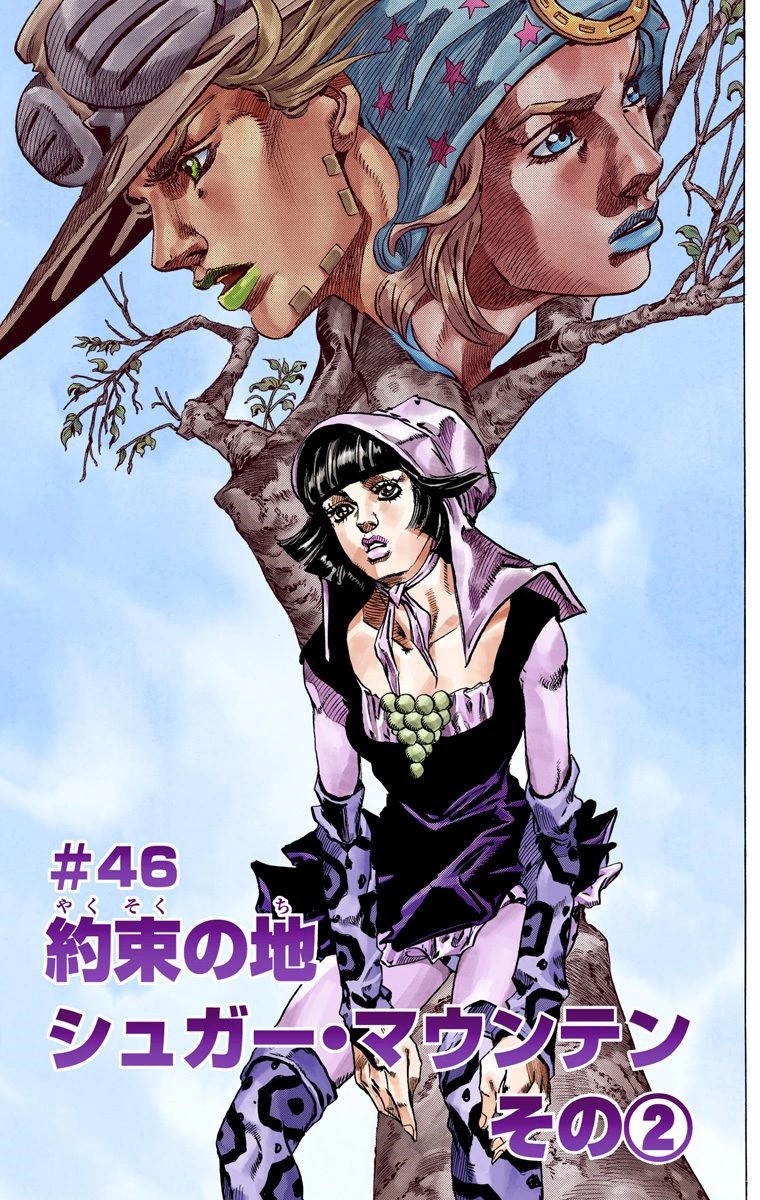 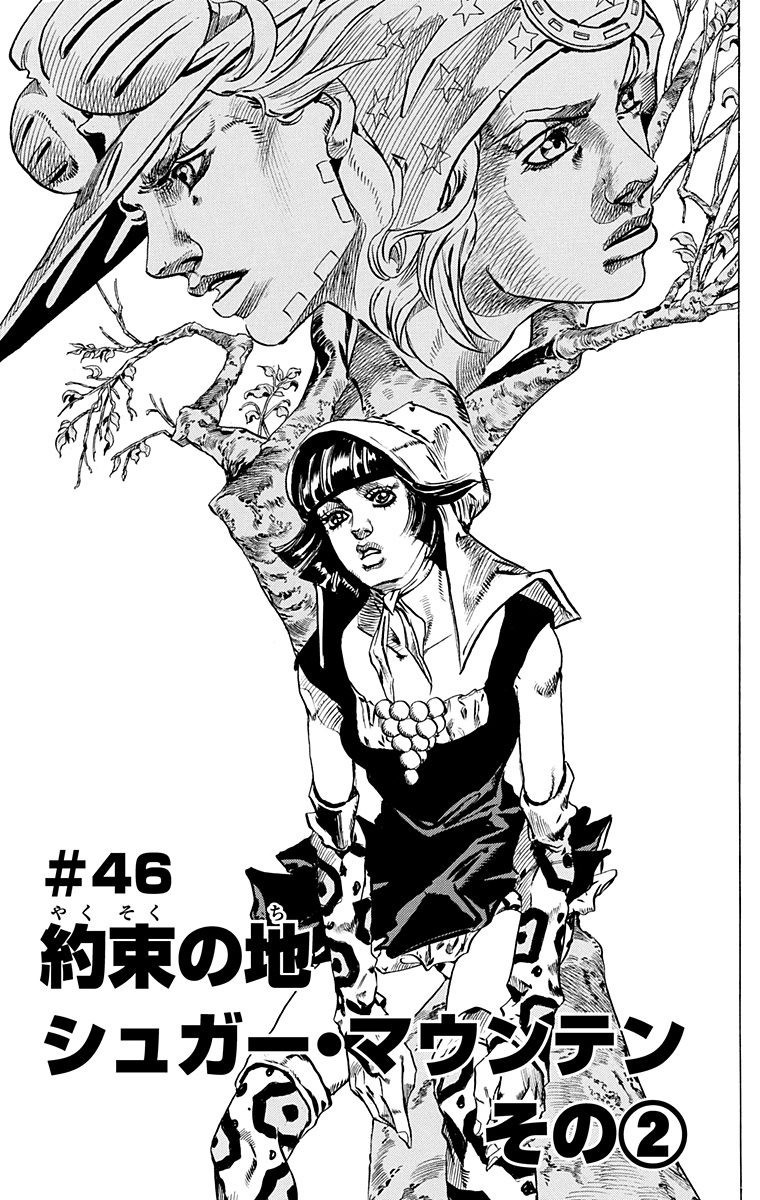 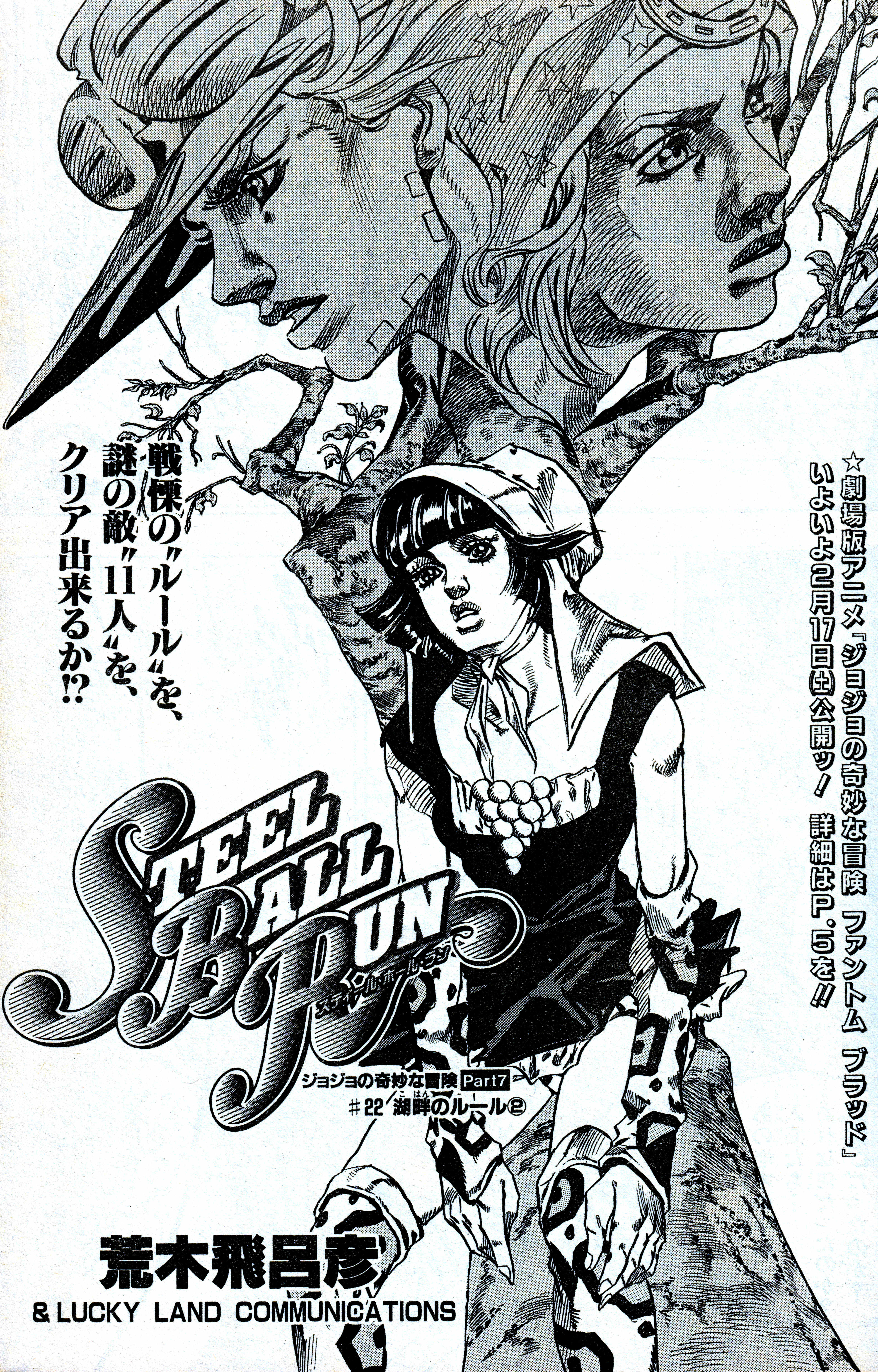 The Land of Promises: Sugar Mountain, Part 2 (約束の地 シュガー・マウンテン その②, Yakusoku no Chi Shugā Maunten Sono 2), originally Rules of the Lakeside, Part 2 (湖畔のルール②, Kohan no Rūru 2) in the UJ release, is the forty-sixth chapter of Steel Ball Run and the seven hundred ninety-eighth chapter of the JoJo's Bizarre Adventure manga.

Having gotten hold of the Right Arm and the Ears, Johnny and Gyro head to Milwaukee to spend all of their money. On their way, Gyro tries to buy a land but the owner refuses, being suspicious of the 100$ bills he's never seen. Gyro tries to bribe him but begins to transform into a root, as bribery isn't spending. He retracts his bribe and saves himself, and the owner agrees to sell a hill in exchange for precious mushrooms. In the city, the duo has many difficulties spending the money, and their riches increase as they sell the gems they had, buy a rented building and immediately get the rent, or a team of geologist offers Gyro money to investigate his hill for copper ore. At the same time the Eleven Men close on Johnny and Gyro's trail, despite their attempts to throw them off.

Gyro then has the idea of gambling everything in a shady casino, and play the roulette with his entire fortune. When Gyro and Johnny suddenly begin to transform into roots as the ball is rolling, they realize that the staff is cheating and that being stolen isn't spending the riches. At the same time, the Eleven Men barge into the casino and raise their revolver to shoot the duo. Johnny uses Tusk ACT2 to cheat and win, freeing both from the root. Gyro and Johnny manage to kill one enemy, but see that the other ten have mysteriously disappeared. When Gyro looks around, two men emerge from the dead enemy's back and shoot off his right hand.