Fist of the North Star's influence on JoJo's Bizarre Adventure 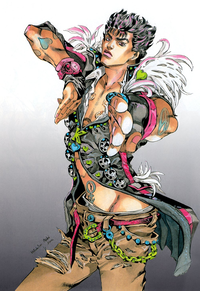 Kenshiro as drawn by Araki

JoJo's Bizarre Adventure contains many references to other things including fashion, media such as other manga or popular movies, and most notably, western music. One of the most prevalent of these influences is the manga Fist of the North Star, with references not only spanning the parts of JoJo itself, but also in Araki's earlier work Baoh the Visitor too. Sumire with Nozzo and Rin with Pel

Baoh the Visitor is Araki's first manga series to feature over-the-top gore in the same vein that Fist of the North Star does.

The character Sumire may be influenced by Rin from Fist of the North Star as they're both 'young girl'-type characters with psychic powers. Although they slightly differ in that Sumire has clairvoyant powers while Rin telepathically calls out to Kenshiro despite being previously mute or far away from him. Sumire's pet Nozzo may have also been inspired by Pel, a small dog Rin takes care of that only appears in the Fist of the North Star anime.

Walken and Jagi's self-inflicted scars on their exposed chests

The antagonist Walken also scars his exposed chest in a fashion similar to how Jagi scarred and exposed his chest to disguise himself as Kenshiro. When Walken's headphones/bandana is destroyed and he goes berserk his psychokinesis attacks cause some Dress members to explode in a similar fashion to how Hokuto Shinken causes its victims to. 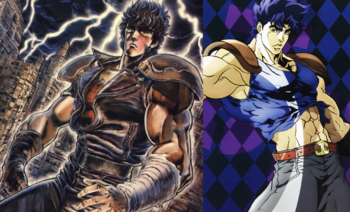 In JoJo's Bizarre Adventure itself, the most obvious influence is the almost identical appearances of Kenshiro and Jonathan Joestar, especially in their original black and white manga forms. Both feature a heavily muscular build and largely blue clothing and both are depicted with either blue or brown hair in various mediums.

Hamon and Hokuto Shinken are also alike in that not only are they both martial arts, but they both feature wide offensive capabilities that go beyond traditional sparring methods, including the involuntary controlling of their opponents and removing poison from their blood flow. 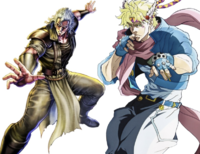 The characters Caesar and Shu both have similar deaths, being fatally crushed by stone bodies of religious significance after being gravely wounded by their ultimate rivals. After being beaten by Wamuu, Caesar is crushed by a stone cross that falls from the ceiling of the fortified hotel. Shu after having his leg's tendons cut, shot by arrows, and impaled by a spear by Souther, is ultimately crushed by the capstone of Souther's Holy Cross Mausoleum. 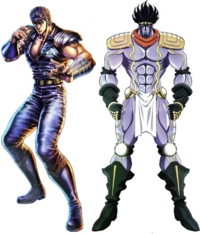 The overall design, and more specifically the shoulder pads, of Star Platinum are similar to the ones of Kenshiro, Rei, and a few other characters in Fist of the North Star.

Silver Chariot's mask is similar to the helmet worn by Jagi, covering everything except their eyes and having spikey downward protrusions that guard their mouths.

Polnareff's search to avenge his sister is also similar to how Rei searches to reunite with his lost sister Airi.

In Chapter 256 the force of Star Platinum and The World's punches cause Jotaro and DIO to begin to lift into the air similar to how Kenshiro and Raoh's fighting auras/toukis cause them to be propelled into the air during their fights too.

During Phantom Blood, Battle Tendency, and Stardust Crusaders's serialization, Araki said he was influenced by the hyper-masculinity of Tetsuo Hara's artwork at the time, something that would begin to fade out with the publication of Diamond is Unbreakable.

Like in Phantom Blood, some panels in the Stardust Crusaders manga are almost one-to-one with some from Fist of the North Star which can be seen in the Reference Gallery 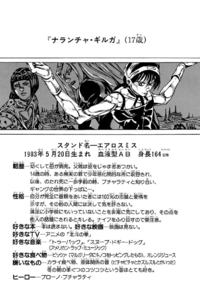 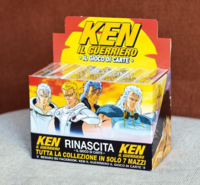 The Italian VHS release of the 1986 Fist of the North Star movie is also the famous source version of the lost uncensored gory parts originally removed by Toei Animation due to backlash.

An Italy-exclusive card game titled Ken il guerriero il gioco di carte also exists and an Italian translation of the Fist of the North Star light novel The Cursed City was also made. 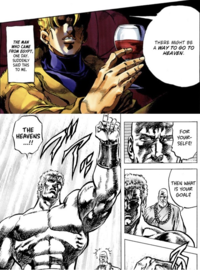 Raoh and DIO both want "Heaven"

DIO's goal to achieve "Heaven" in Part 6 is similar to Raoh's ambition to obtain the Heavens for himself. DIO and Raoh seem to have overlapping ideas about predetermined fate and overcoming destiny to acquire then Heaven

Then in Chapter 701 Kenshiro and Raoh are mentioned in a news report as Anasui leaves to find Weather, being brought into reality by Bohemian Rhapsody.

Some voice actors and staff share overlapping roles in Araki's works and in Fist of the North Star media:

Before working with Buronson, Tetsuo Hara wanted to be the assistant of Buichi Terasawa, author of Cobra, but was rejected and as Terasawa decided to support Araki. Terasawa and Araki then went on to make Cool Shock B.T., which debuted the same year as Fist of the North Star.[Note 1]

JoJo's Bizarre Adventure and Fist of the North Star have crossed over multiple times before as manga serialized in Weekly Shonen Jump, appearing in anniversary artwork together and in crossover games such as Jump Ultimate Stars, J-Stars Victory Vs, Jump Force and in mobile games such as Jump: Ore Collection!.

Both series have also started as shonen manga, but have since began serialization as seinen manga during major revampments (i.e. Steel Ball Run and Fist of the Blue Sky).

one month ago
Score 1 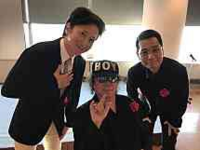 In the 80s, Tetsuo Hara wanted to become the assistant of Buichi Terasawa, the author of Space Cobra. Terasawa rejected him and decided to support Hirohiko Araki instead, who--unlike Tetsuo Hara--wasn't very good at drawing, but was great at story telling.

Terasawa helped Araki write his first manga series, Cool Shock B.T., which debuted the same year as Fist of the North Star.
Permalink
You are ignoring the author of this comment
Show comment | Manage ignore list

one month ago
Score 0
Thank you for that information!
Permalink
Categories: