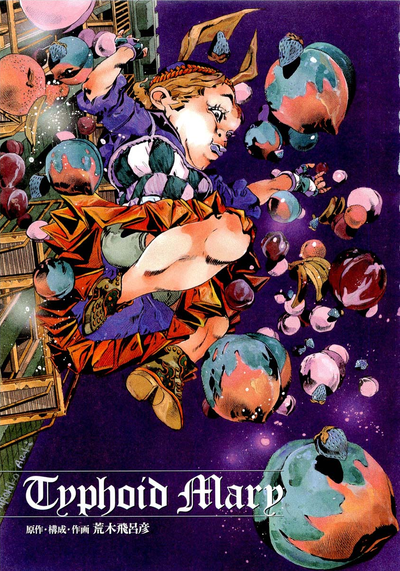 September 2003
“
I refuse! My body is perfectly healthy!
”
—Mary Mallon

The Ultimate Choice That Actually Existed: Typhoid Mary (実在した究極の選択『腸チフスのメアリー』, Jitsuzai-shita Kyūkyoku no Sentaku "Chō-Chifusu no Mearī") is the sixth chapter of The Lives of Eccentrics series, written and illustrated by Hirohiko Araki. It was originally published in the September issue of Ultra Jump on August 19, 2003.

Already as a young girl, Mary had a real talent for cooking and made people happy with her recipes. Even her mother told her that cooking was the foundation of happiness and Mary took that lesson to heart.

In 1897, many people in the house Mary lived in developed a high fever and rose-colored spots could be seen on their chest. For a long period of time, Mary kept changing establishment and houses in which she cooked but each time the people inside would fall ill. After the guests in a party fell ill in 1906, Mary was interrogated by Dr. Soper, a sanitation engineer. Soper said that Mary was a healthy carrier of the typhoid who infected those around her but Mary refused to believe it and tried to escape. Angered by his insults, Mary tried to spit in Soper's mouth and intimidated all the policemen by spitting at them before escaping.

Mary evaded capture until 1907 and was quarantined in a hospital for 3 years. Doctors wanted to have her infected gall bladder removed but Mary refused and thus her dream of cooking for others was denied to her.

However, Mary then escaped and found refuge in the house of a blind old man and his baby. Infecting the baby's bottle of milk, she almost contamined the baby but a series of lucky coincidences prevented the baby from being exposed to typhoid. The police barged in and Mary had to flee again. She was caught in 1915 and was isolated on an island for her trouble. Mary lived the rest of her life on the island and never cooked for anyone. She passed away in 1938.