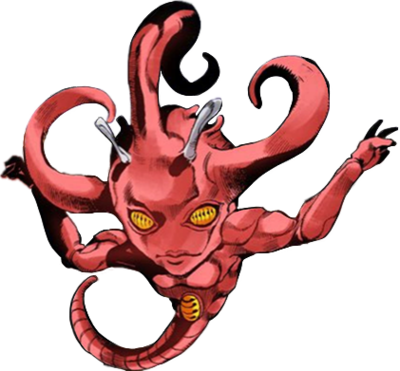 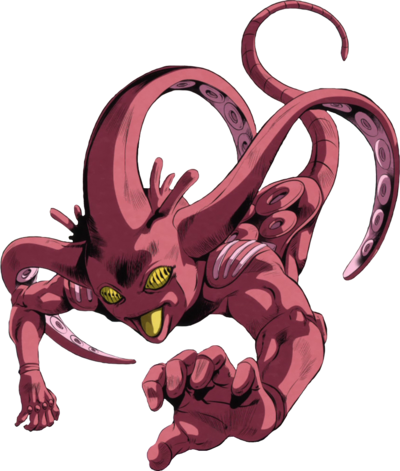 Talking Head (トーキング・ヘッド, Tōkingu Heddo) is the Stand of Tizzano, featured in the fifth part of the JoJo's Bizarre Adventure series, Vento Aureo.

Talking Head is a small tentacular Stand that latches onto a victim's tongue and forces them to lie. 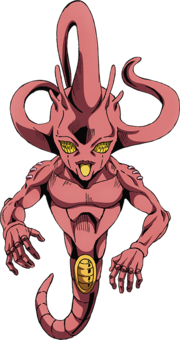 Talking Head is a semi-humanoid Stand that is approximately the size of a human tongue. Its design is based on octopus suckers and an alien larva.[1] Talking Head's face consists of vertically segmented eyes lacking irises and pupils, a mouth, and no nose. Its head has three large tentacles which are used to attach itself to a tongue; one is in the center of its head with the other two on the sides of its head. Beside the middle tentacle are four small horns with two on each side, and the ones next to the tentacle being longer.

Its torso resembles a human's, but a segmented tail replaces its lower body parts. Above the tail is an oval-shaped plate with horizontal lines. The Stand's shoulders have lightly-colored stripes on them, with three on each shoulder.

In its first appearance, Talking Head appears bodiless, only being a large head with its tail and arms connected to the Stand's neck. It also lacks the oval-shaped plate above its tail.

Talking Head is a long distance Stand lacking strength and combat skills. According to its Stand stats, it has negligible destructive power and speed.[2] Nonetheless, it can be a challenging foe as it forces its victim to lie, enabling Tizzano to manipulate his enemies and control their movements.

Narancia is forced to lie about the enemy

To take effect, Talking Head must first latch onto the victim's tongue.[3] While Talking Head is attached, the victim is automatically forced to tell lies: whether the victim speaks, writes, or gesticulates, they will always express something false. If Tizzano so desires, Talking Head can force a victim to speak up and tell lies or remain silent, depending on the victim's resilience.[3]

Tizzano can also freely toggle Talking Head's power, suddenly enabling his victim to tell the truth at an opportune moment to better manipulate his targets.[4]

While partially controlled by Talking Head, the victims are fully aware that they are forced into lying.[3] A savvy interlocutor may understand that something is wrong by watching the clearly distressed victim of Talking Head.[5]

In keeping with its ability to force its host to lie, Talking Head is also capable of controlling the victim's body to a minor degree. It can, for instance, force the victim to perform simple acts like nodding and pointing,[6] and can even elongate their tongue to interact with objects. This is demonstrated when it uses Narancia's tongue to turn on bathroom sinks to draw the attention of Team Bucciarati, later snatching his knife out of his own hand and cutting him with it.[5]