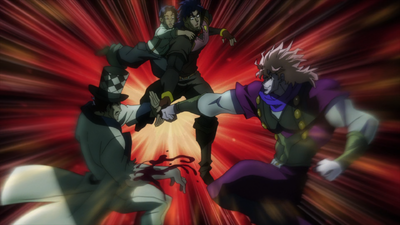 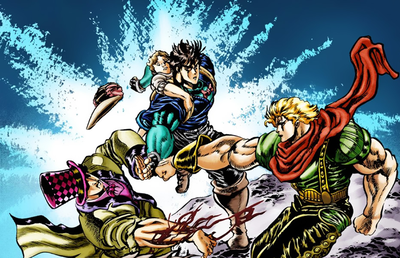 It narrates Jonathan, Will Anthonio Zeppeli and Speedwagon's encounter with Jack the Ripper and then Dio, who has developed a counter to the Ripple.

After Jack the Ripper escapes in a secret tunnel dating from the Middle Age, Zeppeli hands Jonathan a cup full of wine. The Ripple master then orders his pupil to defeat the Zombie without dropping a single drop of wine, in which he will abandon him. Zeppeli finally tells Jonathan that "The Northern Wind made the Vikings" and lets him pursue Jack in the tunnels. Finding himself in a maze of corridors, Jonathan uses a torch to find his way. However, Jack soon ambushes him with a set of giant retracting blades and Jonathan barely avoids the attack before Jack retreats. Jonathan realizes that the light makes him a perfect target and resolves to progress in complete darkness. Reflecting on his master's teaching, Jonathan concentrates on the Ripple and realizes that the wine allows him to detect nearby life forms. Finding Jack's location, Jonathan sends a Ripple through the wall and kills the zombie.[1]

Jonathan and his allies arrive at Windknight's Lot.

The trio subsequently reaches the surroundings of Windknight's Lot, Jonathan looking around while Speedwagon asks Zeppeli to teach him to use Ripple despite being told he lacks the skills and aptitude to utilize it. Jonathan turns around to see Speedwagon doubled over in pain, Zeppeli having missed his attempt to force Speedwagon to generate the Ripple and simply hit the diaphragm. Suddenly, a boy snatches the group's bag; tied to a bent tree branch, the boy uses the backlash to catapult himself toward a pond and scales the cliff on the other side. The group follows the boy, walking on the water with the aid of the Ripple save for Speedwagon. Jonathan then hits the rock surface with a Ripple punch to knock the boy off and catch him. Once caught, the boy suddenly comes back to his mind. Jonathan, Zeppeli, and Speedwagon find themselves near a cemetery, and zombies begin to spurt from the ground, attacking them while Dio watches atop a rock formation. He has hypnotized the boy into luring Jonathan into a favorable ground. As night falls, Jonathan and his group are surrounded by zombies before seeing Dio above them.[2] 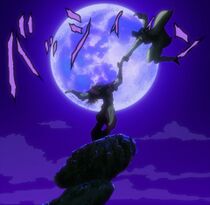 Jonathan and Speedwagon manage to fend off the zombie hoard while Zeppeli confronts Dio, demanding how many people he killed to restore his previous burnt body with the vampire cynically asking back how many pieces of bread the Ripple master has eaten. This ominous answer infuriates Zeppeli, who leaps at Dio and punches the vampire with the Sunlight Yellow Overdrive. Against all expectations, Dio resists the attack: he has frozen his own arm and the frost is enough to even gravely wound Zeppeli's arm. The vampire has countered the Ripple by freezing his and his opponent's bloodstream, for blood flow is required to conduct ripples. Dio prepares to crush Zeppeli's head with a punch, but Jonathan intervenes and blocks Dio's attack.[3]