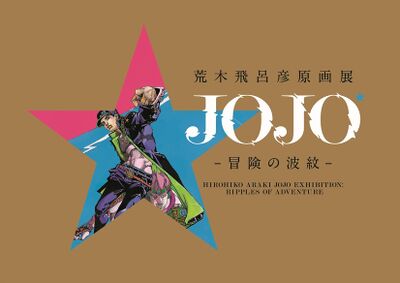 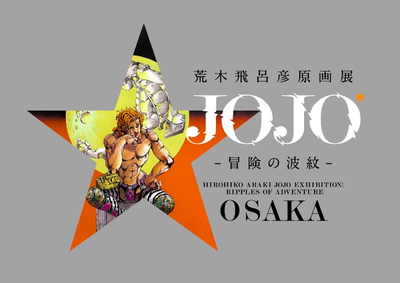 The book is a catalog filled with illustrations and manga panels from each part with titles and descriptions in Japanese and English. The content is separated into different sections.

The Osaka exhibition had a different catalog featuring DIO on the cover. Its titles and descriptions were only in Japanese.

The aim was to bring guests and characters together

-- So this compilation of large, exclusively-drawn original artwork features various characters who have appeared in JoJo's Bizarre Adventure throughout the years.

★ I had a hard time figuring out who be included, but in the end I decided to use the silhouette of each character, and make them so that they all look different. Originally, I wanted to draw the JoJo Family characters spanning all eight generations, but then I started thinking about various things, such as how to fit only eight characters on 12 sheets, or maybe to go with six JoJo characters and six villains instead. Finally I decided to balance it out on 12 sheets based on silhouette-based differences, male-to-female ratio, and so on. So I ended up including Bruno Bucciarati with a bob cut (from Part 5), Gyro Zeppeli wearing a hat (from Part 7), and Iggy the dog (from Part 3). For women, I included Jolyne Cujoh with her double-layered hairstyle (from Part 6), and Yukako Yamagishi (from Part 4), since she was the only one with long hair from a silhouette perspective.

-- I was surprised that 12 sheets had to be filled with artwork, which is quite a lot.

★ Since these pictures had to be displayed at an exhibition, the first thing that came to mind was Leonardo da Vinci's "The Last Supper." That mural features Christ and the 12 Disciples, so from that perspective it coincides with the number 12. And from my own recollection, the duodecimal system has 12 at its base, with 24 being a multiple of 12, the number of hours in a day. From that I can see it's a "repetitive number" connected to eternity, while phrases like the 12 disciples and 12 gods tell me it's a "number of good fortune." So when creating the collection of 12 sheets, I really stuck to that number 12, including 12 characters, along with 12 Stands as well. Also, since Judas the Betrayer is a significant figure in "The Last Supper," I thought of using "There's Always a Traitor" as a theme for this artwork. So I gave the characters these profound expressions, implying that they might be on each other's side, or might not be, and a traitor might be among them, as I think this adds a sense of drama to the project. In addition, I was thinking about a deep meaning behind the poses and style of drawing I should use for the characters, so each one would leave a lasting impression on guests.

-- These art pieces are enormous in size, with each sheet stretching 2 meters high and 1.2 meters wide.

★ My theory behind this was that, by drawing these characters the same size as humans, I could eliminate the border between fantasy (the manga world) and reality (the readers' world). I thought this would bring significant meaning to the concept of large-format exclusive artwork. Since I drew them like this to create an illusion of bringing together guests and characters, or unifying them rather, I also made sure the horizon of these pictures was at human eye level of about 160 centimeters. My aim was to display these 12 sheets so that visiting readers could feel as if they were entering into the same space as the characters. If they're able to experience this feeling, then I'm truly satisfied.

-- Once you finished drawing this large-format artwork, what can you say you gained from the experience?

★ Even though some of the characters included in this artwork have already died off, drawing them again like this, all together in the same time and space, was quite an amazing experience. It's like the joy I might feel when being reunited with old friends. Also, I developed a deeper affection for each of the characters, something I'd never experienced before. For example, since Jolyne has a life-sized face, it felt like I was putting makeup on an actual woman's face when I was brushing in the color. I felt as if she was right in front of me, and I grew more fond of her because of that, which was a pretty interesting experience. Manga artists usually sit at a desk to create their works, and the opportunity to do life-sized original artwork rarely comes around, so it was an honor to do this project. I feel as if I've ventured into a new world through this experience.
”