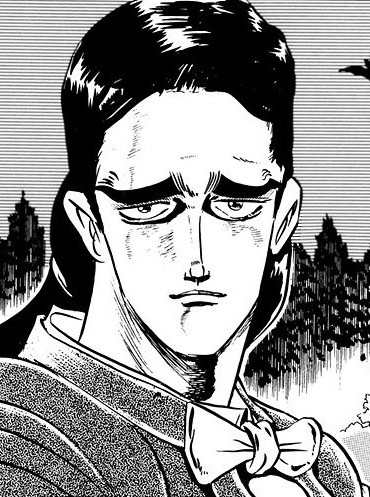 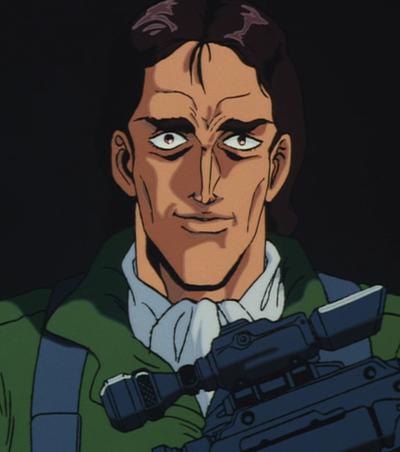 Atomized by Walken (Manga)
Caught in an explosion (OVA)

Dordo is an adult man with a lean face, large eyebrows and noticeable eyelashes. The OVA gives him a more rugged face with sharper outlines. Dordo has long dark hair he ties into a ponytail.

In the manga, Dordo first appears in a two-piece suit with a bowtie. Later, he dons a dark cloak with a wide-brimmed dark hat. In the OVA, he instead wears a plain military uniform with a bulletproof vest.

It is revealed that Dordo is a cyborg whose right side has been replaced by mechanical parts, including the right side of his head. After it is revealed, Dordo keeps the metal frame of his cyborg face revealed.

The series is known for alternating colors between media, the information presented below may or may not be canon.
Skin(Tan)
Parts(Gray metallic parts)
Hair(Dark Brown)
Eyes(Red irises)
Outfit
(Green uniform, white scarf and hair tie, grey vest and pouches)

Dordo is a sly assassin specialized in underhanded tactics.

Dordo acts ruthlessly and prefers to give himself an unfair advantage in combat. Contrary to all the previous assassins who openly confronted Ikuro Hashizawa, Dordo carefully prepared his assassination attempt. He was notably warned about Sumire's prediction powers and struck when she was tired. Dordo used the old man who invited Ikuro and Sumire in his home as a proxy assassin by hypnotizing him and when this failed, he used special bats to disable Baoh's senses and try to inject poison in his veins. However, when that also failed and Dordo was forced to face Baoh head-to-head, his confidence crumbled and he revealed his cowardly self. He fled and took Sumire hostage in order to use her as bait later. Dordo shows great confidence in his sniping abilities, which are enhanced by his cybernetic parts.

Humiliated when he came back to Dress because he only captured Sumire, Dordo succumbed to rage and decided to go snipe Ikuro alone. Not only did he fail, he was executed by Walken for his disobedience.

In the OVA, Dordo has a more soldier-like and professional personality. His occupation shifts towards being a field officer for Dress, who dutifully executes Dr. Kasuminome's orders. Instead of his manga self, Dordo openly confronts a Baoh-infested dog, sniping him in the head without breaking a sweat despite the dog being right in front of him. He also confronts Ikuro openly, although he's still ruthless enough to take Sumire hostage.

After surviving an explosion, Dordo's right side has been replaced with mechanical parts. Thus, he is a cyborg assassin who uses a variety of tools to kill his targets. His metal body makes him more resistant to damage than the average human, allowing him to withstand Baoh's Bee-stinger which melted the fake skin of his face but left his metal frame undamaged. While Baoh was able to sever his metal right hand, Dordo could also still remotely control it, which helped him take Sumire hostage.

During his introduction, Dordo's right hand contains a hypnosis device that helps him brainwash an old man and make him shoot Baoh at the time of his choosing. The fist also contains four small pistols which fire from each of his knuckles. Finally, there is an explosive hidden in his hand which can serve as a makeshift grenade.

His right hand is detachable and he is able to replace it with a sniper rifle that connects to his right eye in order to make him aim better. However, Dordo shows great confidence in his natural sniping abilities too.

A folded hang glider is hidden in his back and can be deployed so that Dordo can flee. The OVA adds a jetpack to explain how he can propel himself.

Dordo uses special bats that release a special aroma tailored against Baohs. The aroma neutralizes the extrasensory organ of the Baoh and leaves them unable to feel from where the next attack is coming from. Dordo controls them through a special ultrasonic emitter that's also installed in his right hand.

Dordo is an assassin working for the Dress Organization. He claims to have killed 2,500 people.[2] After surviving an explosion, Dordo's body was partially replaced with mechanical parts, making him a cyborg.[1]

After Ikuro Hashizawa and Sumire escape from Dress, Dordo is deployed to assassinate the boy. He first acts when Ikuro and Sumire go to the mountains and take shelter at an old couple's house. Dordo waits for the moment Sumire falls asleep to prevent her precognition from warning her, and secretly hypnotizes the old man. He then instructs him to wait for midnight and then shoot Ikuro in the head with his shotgun. Until then, Dordo watches the house.

At midnight, the old man tries to shoot Ikuro but the latter turns into Baoh and survives the shot. This plan fails so Dordo deploys his "aroma bats", which deprive Baoh of his senses. When the old man (who has come to his senses) and Sumire barge out of the house, Dordo claims that Ikuro and Sumire are infected with a virus, using Baoh's monstrous appearance as a proof, and that he must neutralize them for everyone's safety. The old man doesn't buy the story as Ikuro and Sumire are his guests, and shoots the syringe of poison Dordo planned to use on Ikuro. In retaliation, Dordo shoots the old man in the stomach with a gun hidden in his hand. The old man then shoots down the aroma bats, freeing Baoh.

Baoh seemingly makes short work of him but it is revealed that Dordo's entire right side is mechanized, meaning he was able to shrug off the worst of Baoh's attack before being thrown into a tree. His mechanical hand was severed but he is able to remotely pilot it and takes Sumire hostage before fleeing back to Dress' laboratory with Sumire, planning to use her as a bait.

At the Dress facility, Dr. Kasuminome chastises him for his failure to kill Baoh and his colleagues mock him too. Angered, Dordo leaves alone with a sniper rifle and tries to shoot Ikuro from the top of a building. However, Ikuro has learned to master his powers a bit. The boy senses the bullet coming for him and shields himself before it's too late. Dordo must return to Dress, and Dr. Kasuminome has him executed by Walken for insubordination. Walken psychically forces the atoms of Dordo's body to shake and turns Dordo to dust.

In the OVA, Dordo appears earlier in the timeline, supervising Kasuminome's demonstration of the Baoh to the Masked Men. He shoots the Baoh-infected dog that was used as a demonstration in the head, allowing his team to kill it for good. Walken divines Ikuro's location and Dordo leaves with a squad of soldier. The soldiers fight Ikuro in an abandoned building but are massacred. Dordo takes Sumire hostage and shrugs off Baoh's bee-stingers thanks to his cyborg body. He flees with a deltaplane, taking Sumire with him to use her as bait. When Ikuro comes and scales a cliff to reach the Dress facility, Dordo tries to kill him with a sniper rifle. However, Ikuro uses the Dark Thunder Phenomenon to send the explosive bullet back at Dordo, which destroys his helicopter and kills him.