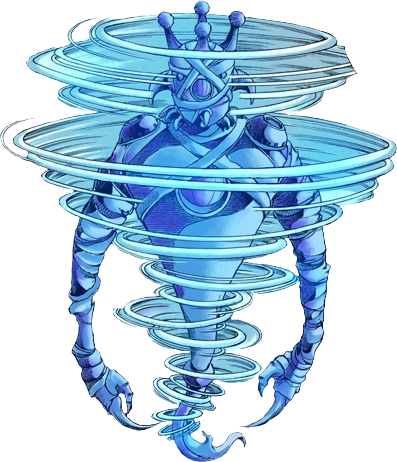 Doobie Wah! (ドゥービー・ワゥ！, Dūbī Wau!) is the Stand of Aisho Dainenjiyama, featured in the 8th part of JoJo's Bizarre Adventure, JoJolion. It is a small clawed Stand dwelling inside of a mini-tornado. When Aisho summons it, it automatically tracks its target, appearing from the target's breath to pursue them relentlessly.

Doobie Wah! usually manifests in the form of a rapidly spinning small tornado with a vaguely genie-like humanoid figure inside.

It has two short drooping horns, as well as a single short spike jutting out of the lower half of its face, directly below a single mechanical eye. It appears to have something resembling a crown on its head.

Like Little Feet, it has long bladed index fingers. 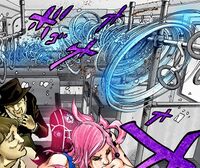 Doobie Wah! is able to pursue multiple targets, notably manifesting from both Tsurugi and Yasuho's exhalations after Aisho stepped on their combined Stands.[3][4] }}