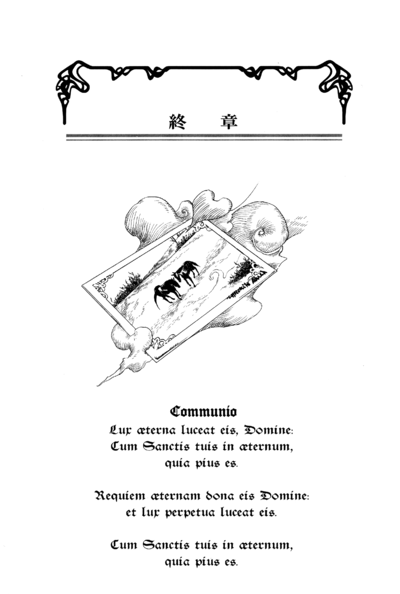 The child is born, and Akari Hirai doesn't mind the postpartum pain. She lets the baby suckle on her nipple for milk, and her heart is filled with delight at how adorable he is. One day, she places the baby in a basket, which is lifted out of the alleyway. In exchange for her baby getting to leave the alleyway, she will tell them exactly where the money has been kept. As soon as she sees the picture of the baby at the temple steps, she tells Teruhiko that the money was in the alleyway the entire time. Akari would lie in the alley, dreaming of her child until she died.

The fire that had broken out on March 17, 2000 died out after only one house burned down to ash. A man's corpse was found to be Teruhiko Futaba based on his dental records, but he was already dead before the fire started. Chiho Futaba was a primary suspect due to the fingerprints on the knife. Later that same day, the body of a boy was found face down by the entrance to the Thorn Building. The boy was identified as Takuma Hasumi who fell down the building after suffering multiple comminuted fractures. The director of the orphanage took charge of his body, and a service was held at a nearby temple. Chiho Futaba was not found ever since that night, and the close relationship between Chiho and Takuma was noted by the police.

At least, that's all the information available to the public. Koichi Hirose asks Josuke Higashikata and Okuyasu Nijimura for details while they are both recovering from their injuries in the hospital, and the story is pieced together. They piece together the story based on everything they've witnessed, but then move on with their lives.

As Koichi walks to study at the library with Yukako Yamagishi, he comes across Chiho Futaba at the bus station to go to S City. The two talk for a few minutes, where Chiho says that she was able to stay hidden from the police thanks to her mother. Koichi asks her for information on Takuma Hasumi, but she starts crying. All of a sudden, Koichi notices how large her belly is. Although the rest of her body is slender as every, her belly is round and swollen. Chiho says that she doesn't spite Takuma, rather she thinks that her baby gives meaning to his life, that Takuma's life wasn't a worthless speck of existence. She tells Koichi to give everyone her regards, and Koichi prays that both her and her baby's life remain joyful as leaves on the bus for S City.