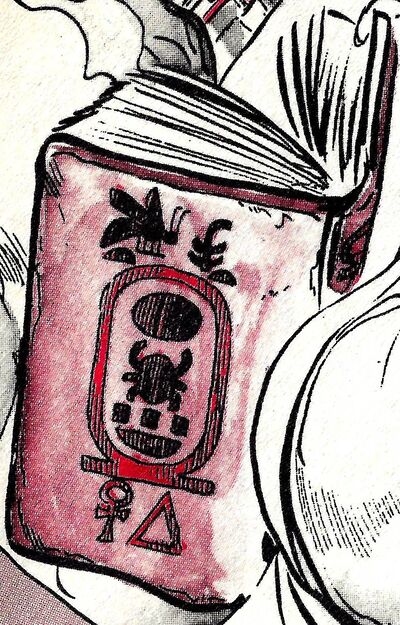 The Genesis of Universe
This article is about the Stand. For the novel, see JoJo's Bizarre Adventure (novel).
“
Ptah is the Egyptian god of creation. This book narrates the revelations of god Ptah and of Ani, the scribe who wrote them down. It’s somewhat terrifying, the history of an Egypt of thousands of years ago is told to you...
”
—E. Stevenson, The Genesis of Universe Chapter 2

The Genesis of Universe is an ancient Stand that is bound to a history book, with all wisdom and history sealed in it. The book itself is large and thick, and the cover is decorated with Egyptian hyeroglyphs.

It was excavated circa 1500 B.C.E., from the remains of the New Kingdom era. However, its contents range from the Early Dynastic period, circa 3000 B.C, to the present age. The things written in it aren't limited to historical facts, as it even has contents about traditions, making it possible for the user to make real even simple superstitions. The Stand represents the Egyptian god of creation Ptah, so it can be considered a book of creation.

This Stand can instantiate the history that is written in the book. The user needs to read the history (either aloud or silently) and then call the historical cause of it, turning it into reality. The user is free to choose from historical to legendary things, even creatures, as long as they are written in the book. It can only materialize one thing at a time, which will disappear if its page is damaged or otherwise made unreadable.

Hermit Purple had difficulty telling if the projections are the real ones brought to the present or simply illusions, probably being part of the Stand itself.