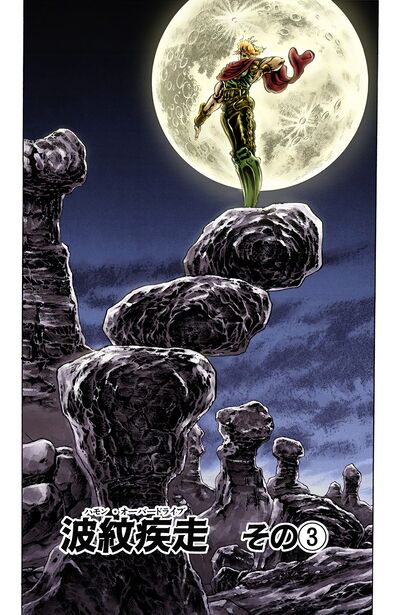 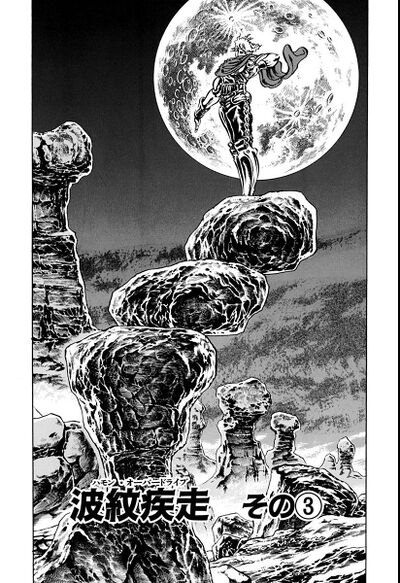 Speedwagon remembers the death of George Joestar upon seeing Dio, becoming enraged at the latter's past actions; Jonathan also has the image of George’s death in his mind. The young boy is completely unaware of the situation, and Jonathan asks for his name. The boy tells him that his name is Poco. Jonathan tells Poco to get on his back and hold on to his backpack straps as the trio prepares to fight a horde of undead knights. Jonathan and Zeppeli are armed with only their knowledge of the Ripple, while Speedwagon takes up a sledgehammer to defend himself. They are able to fend off the horde, and, eventually, Zeppeli confronts Dio, who is still observing them from atop a rock structure.

Zeppeli tries to get Dio to come down from the rock and fight him, but Dio refuses to do so. Zeppeli jumps into the air and attempts to destroy Dio with a Sunlight Yellow Overdrive, but Dio counters by freezing Zeppeli's arm. Zeppeli's arm splits open, seemingly unraveling itself and almost causing him to compromise his breathing pattern. Dio prepares to crush Zeppeli's head with a punch, but Jonathan intervenes and blocks Dio's attack.