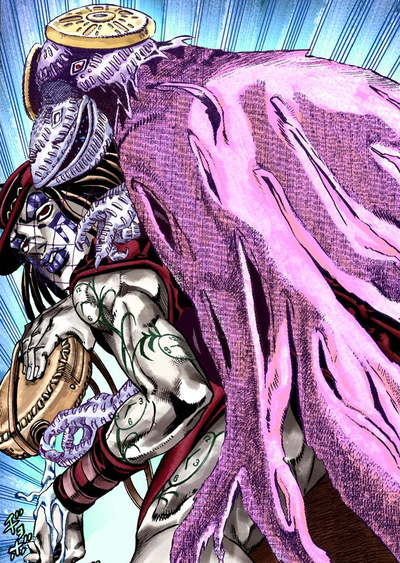 Boku no Rhythm wo Kiitekure (ボクのリズムを聴いてくれ, Boku no Rizumu o Kiitekure, lit. "Listen to My Rhythm", or in Spanish "Oye Como Va, Mi Ritmo") is the Stand of Oyecomova, featured in the seventh part of the JoJo's Bizarre Adventure series, Steel Ball Run.

It is a vaguely humanoid Stand with a bird-like head that grants Oyecomova the ability to put bombs into any material he touches.

Boku no Rhythm wo Kiitekure resembles a shoebill with two round discs on the sides of its head. It wears a large, tattered pink cloak. As a result, its presumed body is unseen but two arms with the same stitch motif are visible.

Its design was based on native African artwork.[1]

The series is known for alternating colors between media, the information presented below may or may not be canon.
Body
(Lavender body with golden discs on its head.)
Eyes(Crimson)
Cloak(Pink)
Bomb Timers(Golden case, white face, black hands.)

Boku no Rhythm wo Kiitekure's bomb ability makes it very dangerous to face directly, as anything around Oyecomova becomes a potential trap. 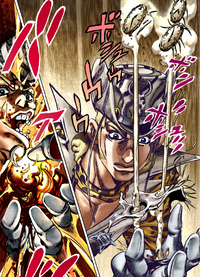 Boku no Rhythm wo Kiitekure has the ability to insert small bombs into practically anything Oyecomova touches.[2]

The bombs take the form of small pins topped with clocks that affix themselves to any surface, not just solid matter. It's been shown that the pins can be placed on almost anything, including Oyecomova's skin,[3] other people,[2] water, animals, dirt, and even cigarette smoke.[4]

After a while, the highly-sensitive pins are set off when they spring into the air[3] and explode with great force, a couple of bombs being able to inflict significant damage on a building. The only way to stop the bombs is to stop them from springing. However, even if the pins were to be held down by hand, which would severely hamper the fighting ability of most, intense sweating from combat would cause them to ultimately slip loose.[2]

The Stand can place as many pins as it wants, shown when it managed to put one pin on every bee of a swarm.[4] The bombs also make its user essentially untouchable, as grabbing him or striking him would riddle the attacker with pins.[3]