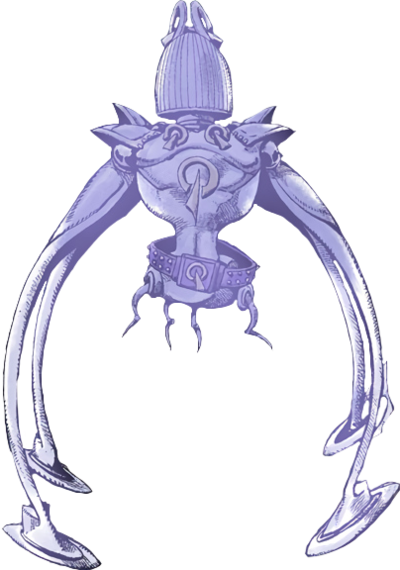 Fun Fun Fun (ファン・ファン・ファン, Fan Fan Fan) is the Stand of Ojiro Sasame, featured in the eighth part of the JoJo's Bizarre Adventure series, JoJolion. When Ojiro stands above someone and their limbs are injured, Fun Fun Fun marks the wounded limb and can control it. 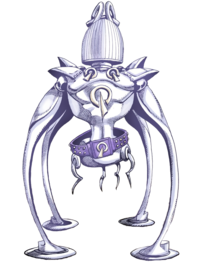 Fun Fun Fun possesses a bell-like head based on a lemon juicer,[1] lined vertically, and a humanoid torso; its waist utterly emaciated, truncated mid-hip. From its hips hang four small leg-like vestiges, while it stands on four disc-like feet from four long, bending legs or tendrils hanging from its shoulders; capped by four thin, sharp shoulder pads. Two roughly Q-shaped pieces rest atop its head, facing its sides, with two smaller shapes on its collar, one large in the center of its chest, and one small on the buckle of a thick, studded belt that sits loosely on its hips.

The series is known for alternating colors between media, the information presented below may or may not be canon.
Body
(Titanium white, purple belt, light yellow symbols and studs)
Symbol(Blood red)

Because Fun Fun Fun's ability is difficult to set up, and it has no physical ability whatsoever, it is unsuitable for direct combat. Ojiro typically uses his Stand to torment ordinary people and prefers to set up traps to take control of an enemy. 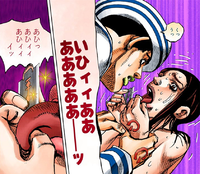 Manipulating the hostage into cutting off her own tongue

From above, Fun Fun Fun can control a target's movements through their wounds, similar to a marionette.

However, Ojiro must be physically above his victims to control them and be conscious of it. One may stand beneath him with all four limbs marked and be free of their movement if Ojiro loses track of their position (for instance, Josuke made the room he was trapped in soundproof in order to throw Ojiro off).[3] An injury doesn't transform into a symbol unless Ojiro stands above the victim.[4] 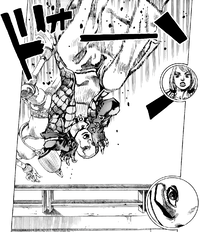 Araki designed Fun Fun Fun with the image of a stethoscope, since it listens in to figure out what's happening on the floor below it.[1]

In the original Ultra Jump release of chapter 5, Fun Fun Fun was originally depicted with a significantly different design, being more humanoid. This original design consisted of a robotic form with skinny limbs and shoulder pads. It had its Q-shaped symbols on its chest, hands, feet and what appears to be a belt. It also had a lemon juicer-shaped head with a singular spike atop its head, which the newer design retained the general head shape. The volume release of the chapter changed the design to its newer appearance but still retained the singular spike on its head.