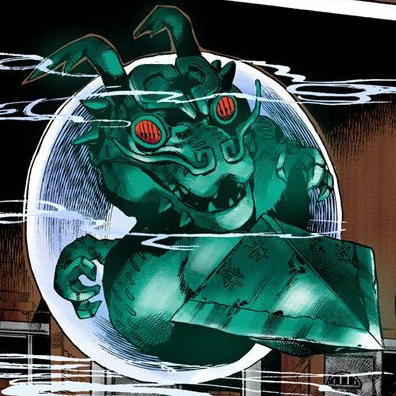 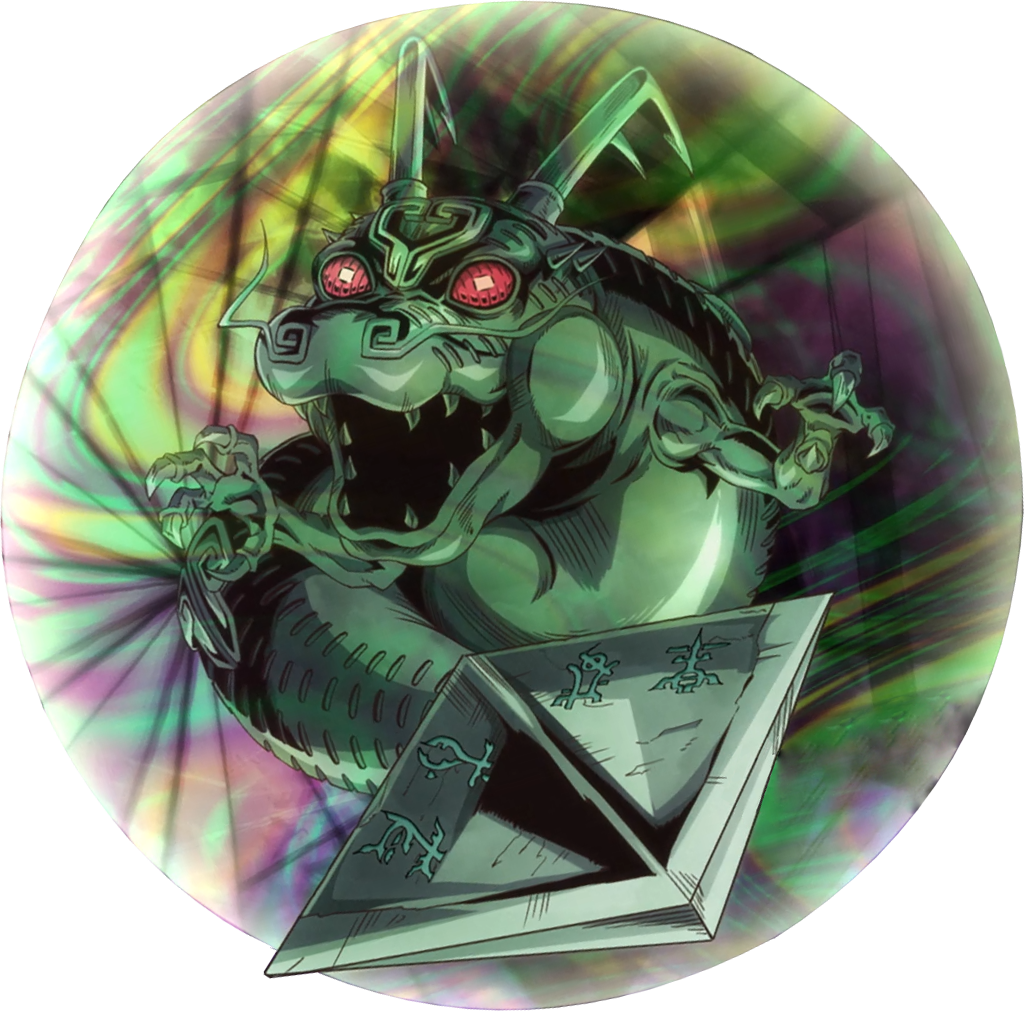 Dragon's Dream (ドラゴンズ・ドリーム（龍の夢）, Doragonzu Dorīmu) is the Stand of Kenzou, featured in the sixth part of the JoJo's Bizarre Adventure series, Stone Ocean. It appears as a compass with a dragon's head and points to lucky and unlucky locations according to the rules of Feng Shui.

As its name implies, the Stand takes the form of a metallic, Eastern-style dragon surrounded by a floating ring. The dragon hovers in the center of the ring and has two small-clawed arms, and a spade-shaped tail that points out before itself, which doubles as the arrow-point of a compass. The ring itself is covered in eight rounded points that each have three smaller points between them. When using its rebound ability, Dragon's Dream cloaks itself in a transparent bubble.

The series is known for alternating colors between media, the information presented below may or may not be canon.
Body(Jade Green)
Eyes(Red)
Body(Dark Green)
Eyes(Pink)

Dragon's Dream is a sentient Stand with a personality separate from its user, Kenzou.[2]

Dragon's Dream acts as a judge during a fight and strives for fairness, going as far as explaining exactly how its powers work against its User's orders, as it finds it unfair that Kenzou tries to keep the mechanics of its power secret in order to get an edge.[3] It always speaks the truth.[4]

It also has a habit of randomly giving divined counsels like getting the picture of a goldfish.[3]

Dragon's Dream is an unusual Stand in that it is functionally neutral during a fight and cannot attack, leaving Kenzou the responsibility of defeating the enemy personally.

However, as Kenzou knows how to use the Feng Shui power of Dragon's Dream to the fullest, the old man still possesses a tremendous advantage. Dragon's Dream allows Kenzou to usually finish off his opponents in one strike, and only the resilience of Foo Fighters combined with Anasui's timely intervention could defeat him. 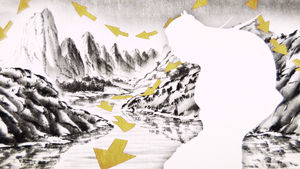 Feng Shui is based on the belief that flows of energy determine good or bad areas.

To understand Dragon's Dream, one must understand the principle of Feng Shui behind it.

"Feng Shui", also literally read as "Wind and Water" is a famous form of divination originating from East Asia. It suggests that by determining natural flows of energy such as the flow of the wind and the flow of the water, one can discern paths to follow. It is usually used to determine good and bad areas in a piece of land so that the well-being of those inhabiting a house built on this land is optimized, and was used to determine the strong and weak points of fortresses.

"Feng Shui Assassination" (暗殺風水, Ansatsu Fūsui) is a martial art using the same principles to determine what points of the body to hit and how to position oneself for the strike to maximize lethality and evade blows no matter how alert and prepared the target is.[5] According to Dragon's Dream, the only way to defeat a Feng Shui Assassination User is to aim for a draw in bad luck and hope that the assassin succumbs the first.[6]

Dragon's Dream reading and pointing to the target's unlucky areas.

Inspired by the principle of Feng Shui, Dragon's Dream's ability is split between its body and a ring both functioning as a compass on which Kenzou can read the coordinates (in cardinal directions, degrees and minutes) of "lucky spots", points in space in which Kenzou can evade attacks thanks to the lucky place, and inversely "unlucky spots", points in which his blows would be fatal.[2][5]

Kenzou summons the compass in his hands to typically determine the lucky spots in which he is sure to not be hit by attacks. To reach them, the old man typically moves around using strange movements to stay inside the lucky spots.[2]

When an unlucky spot is read, Dragon's Dream's body materializes as an arrow inside a hovering ethereal sphere pointing toward the spot. If Kenzou can put a strike inside the sphere surrounding Dragon's Dream, then the blow will be redirected toward a mortal area for the enemy, shown as a limb disappearing before materializing near the victim to attack. Either the blow will be fatal, or events will conspire to deal a wound to the victim through unlikely coincidences, in case Kenzou's attack is blocked.[5]

Inversely, if Kenzou can force someone to touch Dragon's Dream's sphere, it also counts as a successful attack, which results in an "accidental" injury for the target.[3]

There is no counter to the perfectly accurate readings of Dragon's Dream. However, one can trick Kenzou into misreading the coordinates of his lucky spots and therefore render him vulnerable to attacks thanks to his overconfidence.[6]

Because it is based on the natural forces divined by Feng Shui, Dragon's Dream also acts neutral during a fight, and cannot be attacked.[2]

Although it points toward the unlucky spot for Kenzou to exploit, it also means that the target knows where Kenzou is going to strike and can take measures to protect themselves the best they can. Dragon's Dream strives for fairness of chances between Kenzou and his enemy and will advise the target on how to protect themselves to compensate for Kenzou's advantage.[3]