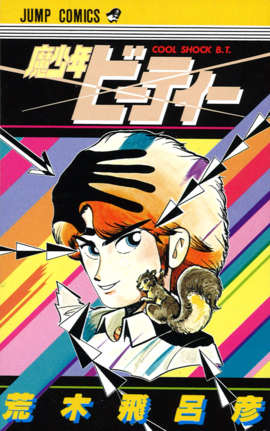 series written and illustrated by Hirohiko Araki. It was first published as a one-shot in the 1982 Issue #3 of Fresh Jump, and then serialized in Weekly Shonen Jump (Issues No. 42-51) from 1982 to 1983. Cool Shock B.T. is notable for being Araki's first weekly serialization.

The manga is split into six chapters consisting of several short stories featuring the titular character, B.T., and his borderline-criminal escapades and misadventures with his often unwilling friend, Koichi. A volume compiling all the chapters was released on October 1, 1984.

The one-shot is also included in the volume release of Araki's succeeding manga, Gorgeous Irene.

“
The creator of Baoh and JoJo's Bizarre Adventure presents a manga about magic and mysteries! You'll meet him at 13:13 pm, on Friday the 13th. He'll do an uncanny intro where he plays a trick on you! And wherever he goes, trouble seems to always follow. Who is this person who creates such incidents? None other than Cool Shock B.T!
”

The first chapter narrates Koichi's meeting with B.T. and his grandmother. At school, Koichi meets with the two and is asked the direction to the principal's office to which Koichi obliges. B.T. playfully plays a trick on Koichi, pretending to spit many marbles out of his mouth when in reality he only spit one and had the rest of them in his sleeves.

The Kid with the Creepy Freckles Incident