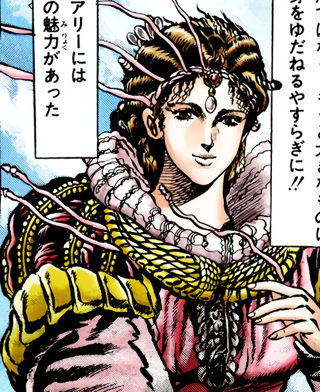 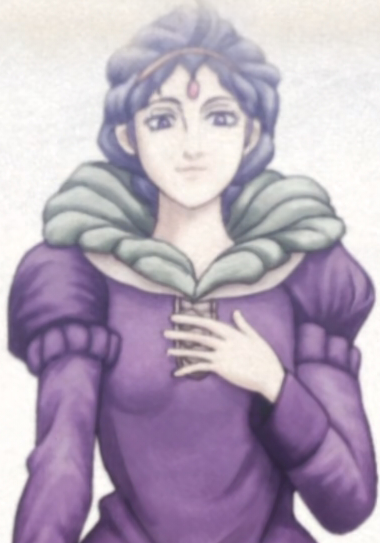 Episode 5 (Flashback)
“
No matter how strong a man is, he needs respite... not in love, but in something greater! Something to devote himself to! Mary provided that for them. That is why she was fit to be queen... (どんな強い男でも心にやすらぎを求める…恋ではなく もっと大きなものに身をゆだれるやすらぎに！！メアリーにはその魅力があった。だからこそ女王としてつとまった…Don'na tsuyoi otoko demo kokoro ni yasuragi o motomeru... koide wanaku motto ōkina mono ni mi o yudareru yasuragi ni!! Mearī ni wa sono miryoku ga atta. Dakarakoso joō to shite tsutomatta...)
”
—Narrator, Chapter 27

She is the queen of Scotland until 1565, when she and her first cousin once removed, Elizabeth I, began fighting over the throne. Bruford and Tarkus are her faithful retainers, and her eventual death on Elizabeth's orders drives the two knights to curse humanity and demand vengeance.

Mary Stuart is a beautiful young woman with a warm smile.[1] She has short neck-length braided hair, and wears a tiara with a gemstone in the center. Her attire consists of a long gown with puffy sleeves along with a ruff around her neck.

Mary is kind and caring, providing respite to the orphaned young knights Bruford and Tarkus. Her peaceful nature made her fit to be queen, as she could easily calm the hearts of the two lonely knights. Regardless of their strength, Mary was capable of giving them hope. Despite Elizabeth accusing her of mariticide, Mary's army pledges loyalty to her and fights for her until the end.[1]

At some point, Mary Stuart became the queen of Scotland and married Darnley. With great tolerance, she provided respite to the lonely dark knights, Tarkus and Bruford. Both knights pledged loyalty to Mary, promising to sacrifice their lives for her if necessary.

In 1565, Mary and her first cousin once removed, Elizabeth I, begin battling over the throne. One day, a sudden explosion at Mary's home kills her husband Darnley. Though the true cause of his death remains unknown to history, Elizabeth accuses Mary of killing him, successfully turning the population against her. Nobles from across the land rebel against her. While Mary's army believe her and feel the accusation was baseless, the people cannot stand their queen being a murder suspect.

Although Tarkus and Bruford's army wins their battle, Elizabeth's army destroys the rest of Mary's side. Elizabeth captures Mary and takes her prisoner, and at some point she orders an executioner to behead her. Having promised the public that she wouldn't kill Mary, Elizabeth employs an impersonator who remains confined to solitude in a tower. Elizabeth uses this impersonator to trick Tarkus and Bruford into turning themselves in to free Mary. Before the two knights' executioner kills them, he points to Mary's head on the ground, revealing that he had already killed her.[1]

Over three hundred years later, Dio takes interest in the knights' story and revives them to exact their revenge against the world. After Jonathan Joestar defeats Bruford, he expresses his contentment with being reunited with his queen in the afterlife.[3]