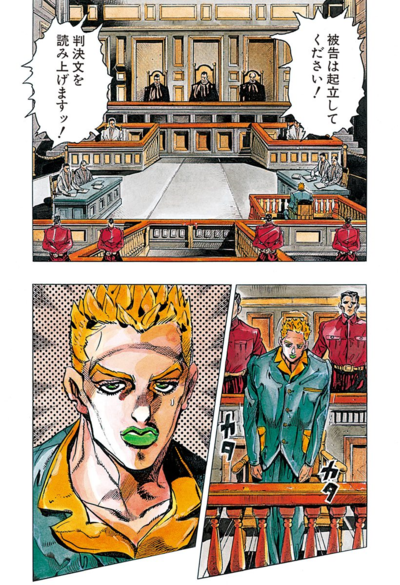 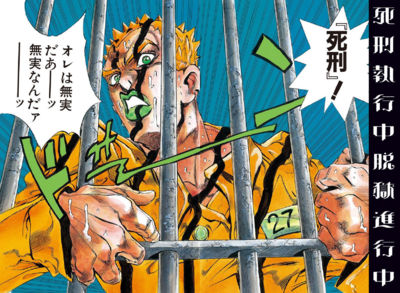 Under Execution, Under Jailbreak (死刑執行中脱獄進行中, Shikei Shikkōchū Datsugoku Shinkōchū) is a short story written and illustrated by Hirohiko Araki. It was originally published in Shueisha's Super Jump on January 11, 1995 and later reprinted on October 22, 2008.

It was later compiled with Araki's other stories in a tankōbon titled Under Execution, Under Jailbreak.

The story begins with an unnamed blond-haired defendant at his trial. The court sentences the punishment for his crime: death penalty. The criminal is taken to jail, where he lies waiting for the execution.

The criminal introduces himself simply as "Prisoner 27", and explains the reasons that led him to this situation: after having slept with a girl, he found out he was missing some money. He asked the girl for an explanation, but she claimed to know nothing about it. He would have been more than willing to forgive the theft, but due to his deep hatred against liars, he went through with killing the girl.

Once in his cell, he quickly finds out that the warden wouldn't come, no matter how many times he'd scream for help. His subsequent investigation of his room lead him to uncover that, despite its appealing look, it is filled with an assortment of traps, including a bee's nest hidden in a light switch; a plate of fishbones, disguised as a fully intact fish; and a chair that has been rigged to break. Barely surviving through these traps, he uncovers that one of the cell walls is seemingly as soft as butter; and tries to dig a way out. Much to his dismay, it is revealed to be another trap: a grinder, hidden just beyond the wall, proceeds to cut the fingers off his right hand.

He falls onto the floor, whereupon he discovers nails scattered all over - snagging his clothes, and attempt to burn him with a secreted acid solution. He risks his life when, trapped upon the sofa, he realizes it's nothing more than an electric chair. In a last ditch effort, he manages to escape electrocution by sacrificing his right hand. The chair explodes, breaching the cell wall. Believing himself to be finally free, Prisoner 27 begins to move towards the exit, before he manages to see another trap in the wall: a guillotine. He decides to wait in his cell until he finds a way out.

50 years have passed since the sentence, and Prisoner 27 is still in his cell, staring at the breach in the wall. Every year, when winter is over and spring begins, he is tempted to run outside. He still swears to himself that one day he will find a way to escape, proving himself more cunning than his jailers.

Author's Note
“
Under Execution, Under Jailbreak
(Published in Allman 1995 No. 2)

What's the difference between a short story and a long story? The average reader might say that "it doesn't make a difference, does it?" But as a writer, if you don't understand the difference between the two, you may be walking down a dangerous path. Let's think about it for a moment. What types of short stories are there?
A. A work that follows the thoughts and actions of the characters.
B. A short story that captures a brief moment in time and symbolizes a life or theme in it like a flash of light.
C. Nonsense, suspense, mood, design, eroticism, and gore. A work that aims to portray itself.
D. Diaries, essays, letters.
Are there any other types? The rest are composite works of each type. When you think about it that way, what's the difference between a short story and a long story? There doesn't seem to be much of a difference at all. A short story is simply shorter, and a long story is simply longer. I suppose Hirohiko Araki's conclusion is that "it doesn't make a difference." For that reason, Under Execution, Under Jailbreak is a suspense story written for the sole purpose of drawing suspense, based on the idea of having a death penalty and a jailbreak at the same time, all in just over thirty pages as requested. The prison is strange, and I like the fact that the people who built it have an eerie presence despite never actually appearing. (I'd call it a C-type work.)
”
—Hirohiko Araki
“
『死刑執行中 脱獄進行中』
（スーバージャンプ 95年２号掲戴）

Concerning this story, Araki has declared that it was born by the idea to make the jailbreak and the execution coincide. The story's only purpose was to create suspense. The prison is bizarre: the person who built it doesn't appear and this absence-presence was the thing Araki liked to describe.