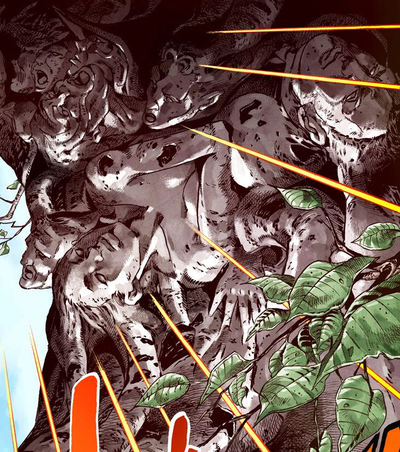 Destructive Power
E
Speed
E
Range
E
Stamina
A
Precision
E
Developmental Potential
E
A
B
C
D
E
A: Very Good
B: Good
C: Average
D: Poor
E: Very Poor
For a character with the same name, see Sugar Mountain
“
Once one person turns into a 'fruit', one other person can leave... We have to 'take turns' to become a guardian.
”
—Sugar Mountain, SBR Chapter 45: The Land of Promises: Sugar Mountain, Part 1

Sugar Mountain (シュガー・マウンテンの泉, Shugā Maunten no Izumi, lit. "Sugar Mountain's Spring") is the Stand of a large tree, featured in the seventh part of the JoJo's Bizarre Adventure series, Steel Ball Run. It acts as a set of supernatural trials that are aimed to test the greed and the avarice of anyone pursuing items possessed by the tree. The tests are enacted by an appointed guardian of the same name.

Sugar Mountain is a Stand bound to the body of an extremely large tree with a small spring lying between its roots. Fused within the trunk are its human victims, most of which display expressions of pain and grimace. Within the tree is a hollow space, with drawings of horses and oxen skulls on the walls. In the space is a wooden chest used by the current guardian to present new victims with their gifts.

The series is known for alternating colors between media, the information presented below may or may not be canon.
Tree(Green leaves and gray bark.)

The Stand attaches itself to the great tree and functions as a trial for those who discover the tree and its current guardian. Although seemingly easy to pass, the test becomes more difficult as it goes on and will push a person's will to its limits.

The tree appoints one of the victims to fail its second trial as its guardian, charging them with interacting with passing people and giving them full disclosure about the tests. The individual's appearance is preserved despite the passing time, thus Sugar Mountain, a female of the same name, retains her youthful appearance despite being the tree's guardian for many years[2] (around 50).[3]

When several people fail the test, they become one with the tree; a limited number of persons can be absorbed, and when one is absorbed, the first in line is released and becomes the guardian.[3] 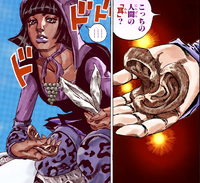 The Stand affects a large area around the tree and activates when a person drops an object in one of the ponds and springs nearby.

A guardian (i.e. Sugar Mountain) then presents said dropped object to the person, along with several much more valuable objects, asking what it is they dropped in the water. For instance, Sugar Mountain asked whether Gyro dropped a Steel Ball, a diamond or a great gold nugget into the water.[2]

If a person succumbs to their greed and lies, the tree punishes the offender: several vines will embed themselves into the person's tongue and then pull their innards out.

If a person tells the truth, they can keep the valuable object along with the original.

The trial is very straightforward and someone can even obtain the corpse part the tree is guarding easily by dropping animal body parts into the ponds and answering truthfully. If the person chooses to end it and leave with the riches, the second part of the test begins. 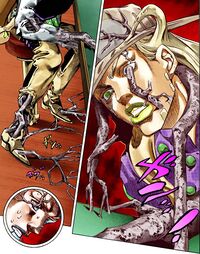 Before sunset, the person who has obtained riches through the first trial must "use them up".[2] If they fail, they are absorbed into the bark and must wait in line until they become the guardians of the tree.

Through lawful exchanges such as trades agreed between parties, selling the riches, or losing them in a gamble, the person must get rid of everything they obtained, even the money given in exchange for the riches.[3] To Johnny's dismay, even the Corpse Parts needed to be traded away.[4] Giving away the riches, throwing them away, having them stolen or losing them because of cheating counts as not rightfully using them and thus the tree will begin to absorb the offender until they get back the lost item.[3]

The trial may be surprisingly hard to complete. If one accumulates too many riches, the administrative ordeal of trading great sums of money, the mistrust of potential traders, or the threat of being stolen from can make someone lose time and fail the test.[3]