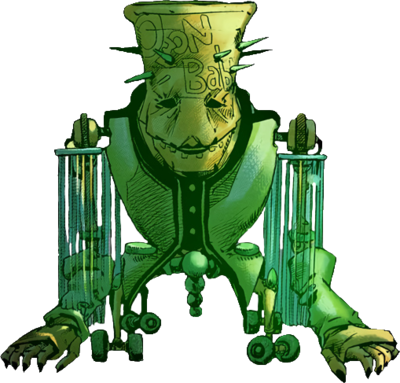 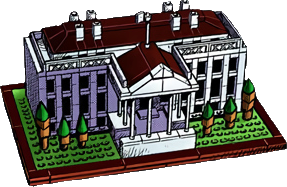 JJL Chapter 70
JJL Chapter 72 (1st full appearance)
This Stand may sometimes be referred to as "Ozone Baby".
“
This ability is a long-range automatic attack! If you close a door, the air becomes pressurized. Open it and go outside, and it becomes depressurized!
”
—Jobin Higashikata, JJL Chapter 73

Ozon Baby (オゾン・ベイビー, Ozon Beibī) is the Stand of Poor Tom, featured in the eighth part of the JoJo's Bizarre Adventure series, JoJolion.

It is a small mechanical Stand bound to a toy house that manipulates the air pressure in the vicinity.

When it is dormant, Ozon Baby appears as a near-exact replica of the LEGO Architecture White House 21006.

Once it is activated, Ozon Baby has a humanoid torso but a mechanical lower body. The top half of its head is covered by a bag-like helmet with several spikes jutting out of it and with the Stand's name imprinted on it in stylized text. Its head is square and muscular, with sunken eyes and dark lips constantly stretched in a maniacal grin, with what appear to be small square tattoos lining its bottom lip. The Stand's torso is covered by a vest with a dark collar, three buttons on the chest (later only drawn with two), and coattails with two larger buttons on each side of the waist.

Although Ozon Baby's upper arms appear mechanical, they become more humanoid from the elbow onward. Its shoulders resemble rolling bearings with tassel-like decorations dangling from them. Its forearms are covered in cloth arm-guards and its fingers end in long, sharp fingernails.

Rather than feet, its legs are attached to two pairs of wheels on the front and back. Each set of wheels have axles connecting them to each other. Protruding downward from its crotch are four spheres connected vertically in a straight line, with each sphere being smaller than the previous.

While in its post-activated state, Ozon Baby's humanoid form is merely an illusion meant to intimidate those it attacks, and cannot be harmed or touched. Any attempts to attack or otherwise touch this form will merely pass through the Stand as if it is made of fog.

According to Jobin Higashikata's findings, Ozon Baby is a long-range automatic Stand, thus possessing a powerful ability sustainable even away from its user Poor Tom. However, proximity to Tom himself dramatically increases the pressure variations. Tom reveals that its power has an area of effect of 100 meter radius.[1]

Ozon Baby's power revolves around manipulating air pressure in a way capable of cordoning off an area. Burying the Lego house in the soil dampens the effect of the pressure.

In addition to this area-of-effect depressurization, Ozon Baby's physical manifestation either can create illusions of itself or is made of air, making it impervious to normal attacks.[2] 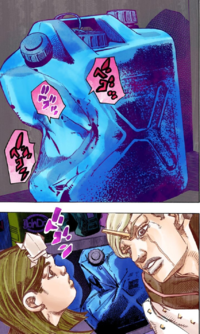 A gas can imploding due to Ozon Baby increasing the pressure

Upon activation, Ozon Baby automatically begins to cause atmospheric pressure anomalies. Hollow objects such as plastic containers begin to collapse in on themselves,[3] and living organisms begin to experience mild depressurization sickness, with symptoms such as pain in the ears and nosebleeds.

If one steps outside of a sealed room, the depressurization sickness becomes dramatically more severe. All the air dissolved inside the blood vessel form bubbles, causing severe bleeding in the capillaries, notably in the eyes, nose and ears, which can debilitate a grown man in seconds, and cause eyes to pop out of their sockets. This effect is likely to prove lethal if the exposure is prolonged.[4]

Any room that is opened but then closed regains its atmospheric pressure, the walls and closed openings acting as barriers to Ozon Baby's power.[5] Any surviving victim managing to regain the safety of a closed room can recover from their depressurization sickness. However, merely staying inside a closed space is also dangerous as the pressure inside will gradually increase to lethal levels.[6] At its worst, the crushing pressure causes the body to cave in on itself.[7]