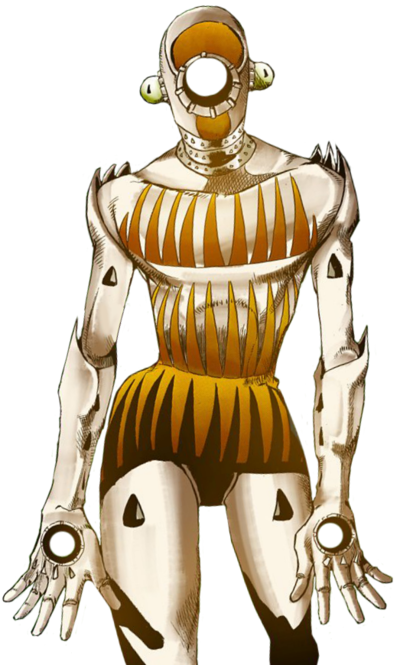 JJL Chapter 56
“
Your money increases little by little. But they always end in the number 13. Eventually I realized I couldn't give money to people, exchange money, or throw money away.
”
—Zaihei Nigatake, JJL Chapter 57: Milagro Man, Part 2

Milagro Man (ミラグロマン, Miraguro Man) is a Stand that once belonged to am unknown dead arms dealer, featured in the eighth part of the JoJo's Bizarre Adventure series, JoJolion. Persisting after its user's death, its ability is to inundate its targets with money until it is physically unbearable. 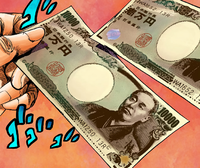 Milagro Man is an artificial humanoid Stand with a thin waist and wide hips, bearing an androgynous look. Its head has bulbs on each side and lacks a face, having a large see-through hole in the center instead. The hole and its bulbs have circular frames with thin lines around them. Its forehead and chin have wide creases which are darker than the rest of its face. The Stand's neck is segmented and has several tiny evenly-spaced circles in each segment, appearing as if it is wearing three chokers.

Its body is patterned in upward-facing, thin triangles which are slightly curved. There are three triangular horns protruding from its shoulders and one protruding from its forearms near its elbows. Its biceps, forearms, and upper thighs have small triangular holes, whereas the center of its hands have large circular holes like its head. Its knuckles jut out with thin triangular spikes. While most of Milagro Man's body is light in color, its hip and pelvis region are particularly darker.

The series is known for alternating colors between media, the information presented below may or may not be canon.
Body
(Beige and brown body with orange triangular patterns, green bulbs.) 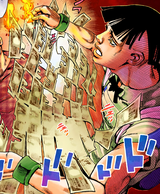 The story of Milagro Man's curse originated from its ability. At its most basic, the Stand can create and duplicate money, with the legal tender changing depending on the country the Stand's money is currently in. The money appears to be generated from the corners of other bills,[3] out of thin air as well.

Anyone afflicted by Milagro Man's power through simple touch will constantly earn money until they are literally buried in cash,[4] eventually resulting in death via crushing or asphyxiation. No matter how they try to spend or destroy the money, it will be returned to them and they will somehow receive more money than they originally spent. The only way to escape Milagro Man's power is to return the money to the previous owner or have the money destroyed by another person, after which Milagro Man is transferred to the new victim.[5]

The origins of Milagro Man are shrouded in mystery. According to Zaihei Nigatake, an arms dealer who lost millions in a lawsuit went mad, killed his whole family, and set his mansion on fire, with only a single scorched bill left intact. The curse sprouted by this heinous act permitted the creation and perpetuation of the Stand.

During an unknown period, the curse passed from one victim to another, as the money kept changing appearance to suit its victim's purpose.

Two years before the events of JoJolion, Zaihei Nigatake was tricked into taking the curse of the Milagro Man when he stole a €20 banknote from the previous victim in Hamburg, who was disguising himself as a homeless person. For two years, Zaihei lived in Morioh under the curse, unable to pass it on to someone else because the curse's existence was an open secret and nobody could be tricked. 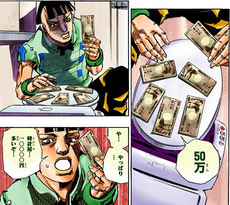 When visiting a local idol goods store, Joshu Higashikata overhears Zaihei Nigatake talking about his favorite idol and being unable to find his wallet. Joshu spots the wallet and uses his ATM card after deciphering Nigatake's PIN from the idol he was talking about. He then cuts up the card after emptying his bank account. From this point onward, no matter how Joshu attempts to spend any of his money, he is refused service and given back more money than he originally planned to spend. When Joshu goes to a night club and the owner accuses him of being associated with "the Milagro Man", Joshu is surprised to be given all of his money back, and more.

Now with more than ¥50 million, Joshu begins to suffer from Milagro Man's effect that he is being burdened with more money than before and tries unsuccessfully to hide it. At some point, he realizes that all of the banknotes have a serial number ending with "13R". Joshu finally realizes something is amiss when even his taxi driver refuses to drive him home and be paid after encountering bad traffic. Joshu forces the money onto the taxi driver, accidentally hitting a lighter in the man's pocket and burning one of the banknotes, causing the money to grow into a humanoid shape and bury him. The next morning, Joshu awakens at home on the living room couch at the behest of his father. Believing the previous night's events to be a dream, he enters his room, only to be buried alive by millions of yen banknotes, all with a serial number ending in "13R".

Joshu successfully tracks down Nigatake, who reveals the origin of the curse. Nigatake finishes by explaining that the only way to pass Milagro Man onto someone else is to have someone steal money from you and then destroy a bill, after which he takes a drink from a bottle of juice. Joshu then reveals he has used his Stand, Nut King Call to attach one of the cursed bills onto Nigatake's juice bottle beneath the label which Nigatake has just torn. Joshu leaves just as Nigatake's apartment is filled with money that Joshu was previously burdened with as a result of Milagro Man's power.