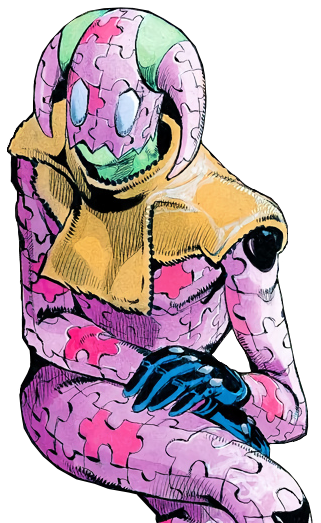 King Nothing (キング・ナッシング, Kingu Nasshingu) is the Stand of Norisuke Higashikata IV, featured in the eighth part of the JoJo's Bizarre Adventure series, JoJolion.

It possesses the ability to disassemble itself into small jigsaw pieces and track a person or object through their scent.

King Nothing is a hollow humanoid Stand made entirely out of jigsaw puzzle pieces. It has two long, drooping horns, and long, shield-shaped eyes. Between its horns and the piece around its neck, it takes a shape reminiscent of certain traditional depictions of a jester.

Norisuke IV has revealed to Josuke that King Nothing is a long-distance Stand with very little physical power, making it unsuitable for open fights.

King Nothing possesses a set of straightforward powers whose limits are not clear as they are rarely shown, Norisuke not being a fighter in the first place. 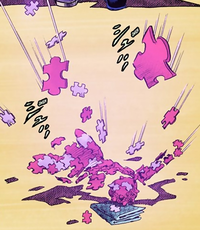 King Nothing reacting to the scent of the Locacaca

King Nothing is able to register the scent of a particular person or object, and track their location like a hound.[1]

When exposed to an object, King Nothing will envelop it with its jigsaw pieces and memorize the scent of the object in question or someone who touched it.[2] It will then automatically pursue the scent, even if Norisuke isn't aware of its activation, and can either follow the trail a person's scent has left until it arrives at their current location, or be kept dormant and automatically be attracted to the scent.[1]

King Nothing can remodel itself to recreate an object or person it is trailing. It does this by attaching pieces of its jigsaw pieces to articles of clothing belonging to the target or surfaces the target has recently come into contact with.[1][2]

King Nothing scattering itself

King Nothing is composed of and can disassemble itself into small jigsaw pieces. It enables King Nothing to slip through narrow spaces when following a trail.[3]

Additionally, King Nothing is able to predict and transform into the form of whatever it's tracking using its jigsaw pieces, such as when it reconstructed the entire plant of a single broken Locacaca.[1] This ability is tied to its scent tracking.