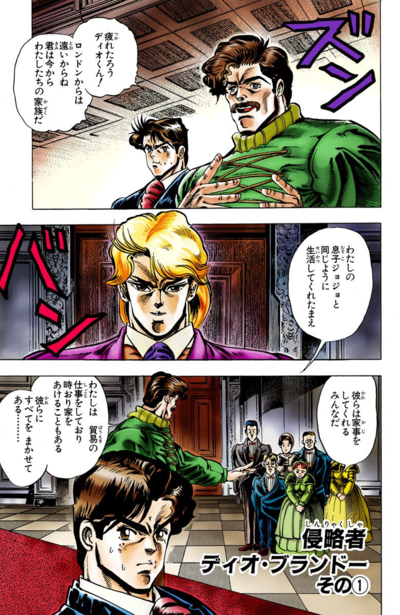 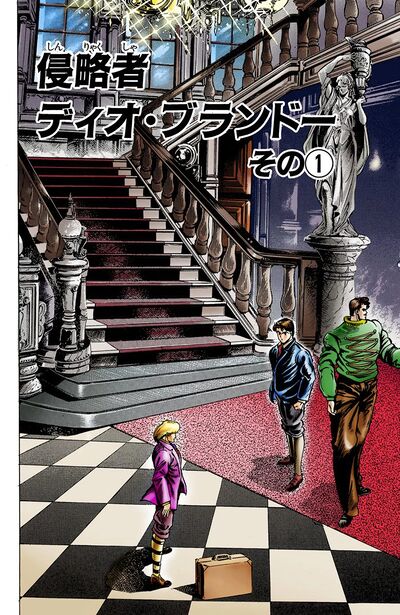 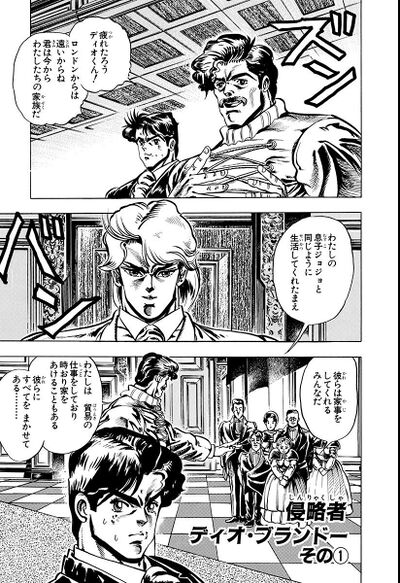 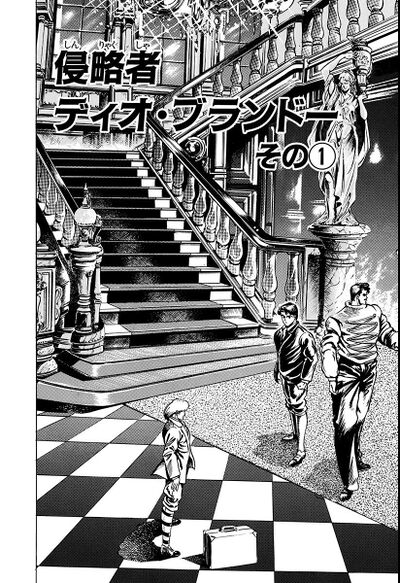 George welcomes Dio into the Joestar mansion as a son and introduces him to the servants. He expects him to get along well with Jonathan, as they are both motherless and roughly the same age. Jonathan has mostly forgiven Dio for kicking Danny earlier, concluding that he might have done the same had a strange dog suddenly jumped at him. George prompts Dio to an upstairs tour, shortly leaving the two boys.

Jonathan moves to help Dio with his luggage only to have Dio twist his arm, saying he would rather the servants carried it. Even though Jonathan says he only wishes to be friends, Dio states that he is the first in everything and that Jonathan will never look down on him, elbowing him in the stomach. Dio adds that he is, in fact, not afraid of dogs, but hates them and the way they grovel around humans. George indirectly stops the confrontation when he calls Dio to show him to his room.

George makes it a point to raise the boys as gentlemen, instructing them in a number of disciplines such as studies and table manners. Dio easily outshines Jonathan in both these things, leading George to conclude that he had been too soft raising his son, telling Jonathan to learn from Dio's example.

Sometime later, Jonathan takes part in a local boxing competition, which was almost thought of as a religion by the local boys. Though he was supposed to face the current champion Mark Watkin, Jonathan's match is turned around when Dio shows up to challenge him. When the fight is set, the two wager a month's worth of their allowances on it before starting.

Jonathan throws a flurry of punches, but Dio effortlessly dodges all of them by swaying. Dio stuns Jonathan with a jab in the stomach, immediately connects a direct punch to Jonathan's face and surreptitiously follows through by jamming his thumb into Jonathan's eye. With Dio's stunning victory, the boy's friends take a liking to him and he takes the opportunity to discredit JoJo among them by calling him a snitch. As Jonathan struggles to get up, blood running from his eye, he wonders why Dio is trying to ruin his life.