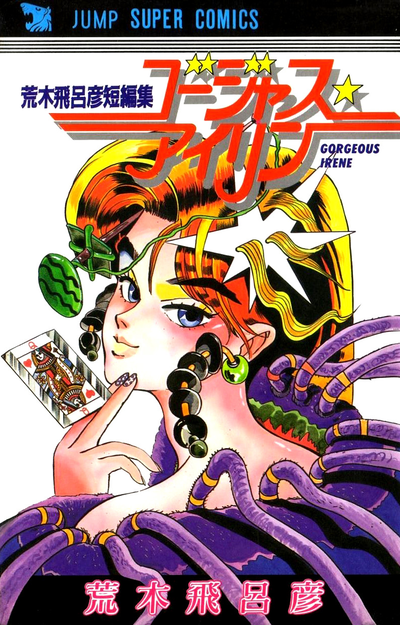 Included in The Gorgeous Irene

95
“
This is the story of the unbeatable assassin. The girl so pure and gentle... Yet ultimately dangerous. She becomes whoever she disguises as, and leaves nothing but the blood of her targets in her wake. That is Irene.
”
—Gorgeous Irene Chapter 1

Gorgeous Irene (ゴージャス★アイリン, Gōjasu Airin) is a two-chapter Japanese manga series written and illustrated by Hirohiko Araki. It was first published by Shueisha in the Autumn Special of Weekly Shonen Jump on October 1, 1985,[1] later followed by a second chapter in Issue #1 of Super Jump on December 29, 1986.[2] It narrates the adventures of Irene Rapona, a young girl who makes a second life as an assassin characterized by her makeup-based techniques.

It has been compiled with other early Araki works such as his debut: Poker Under Arms, and B.T. "The Wicked Boy", the pilot chapter of Cool Shock B.T. 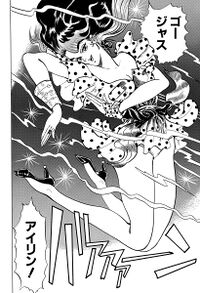 Irene Rapona is a teenage girl with a youthful face and gentle personality. Despite being really gullible and innocent, she is secretly a professional assassin who is able to transform into any type of woman using special makeup. Due to her personality, she is bullied by her classmates.

A young man is taken to Irene by her butler. He hires Irene for assassinating Lauper, a female gang leader in the fictional Swing Town (スウィング・タウン, Suwingu Taun). Lauper replaced the former leader and killed the young man's father. Murders and the crime rate increased, and even children and the elderly were not spared. Lauper starts selling drugs in schools and only keeps female slaves with her in her gang.

Ten days later, the man is caught by Lauper as she discovers that he hired an assassin. Irene reveals herself disguised as an old woman who was hired in the gang. She uses her Battle Makeup to transform her appearance as well as enhance her killer instincts. The gang fires their guns at her but Irene had replaced all their bullets with blanks while she was previously working with them. She tricks them by having the actual bullets hidden in her glove, making it appear as if she caught the bullets. Irene then fires her fake nails at each gang member and kills all of them, aside from Lauper.

Lauper attempts to attack Irene with a giant chainsaw, but Irene dodges all of it and learns Lauper's movements with her special Death Dance. Irene's Heart Magic allows her to take control of Lauper's body after Lauper smells the scent of her perfume. She manipulates Lauper into cutting herself in half with her chainsaw by using her Execution Makeup. Irene expresses sorrow that the young man spoke about her to Lauper. She lets him live because she had promised to and then leaves. 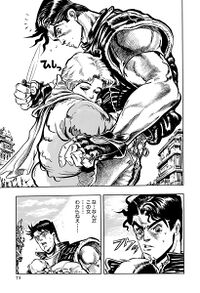 Irene's butler is killed by an unknown assassin. He has a squirrel go find Irene to tell her that an assassin is after her before he dies. The gang puts out a bulletin alert for Irene, warning that Irene is extremely dangerous and has hypnotic powers. In the past, Irene's father was a killer born in the underworld. He was loyal to his boss, but eventually he and his boss were killed by another organization. Irene had inherited his killer instincts and deadly skills.

Meanwhile, a young man named Michael relaxes in the slums of Harlem in New York City. He sees Irene walking by and is shocked as to what a young girl is doing there on her own. The butler's squirrel finds Irene and tells her the news. However, Michael suddenly grabs Irene's purse and knocks her down, demanding her money. He realizes she only has makeup in there and nothing else. Angered at Irene lacking fear, Michael takes out a knife. Irene simply grabs the knife with two fingers and then hugs Michael. Some thugs appear asking Michael to share Irene with them but Michael beats them up. 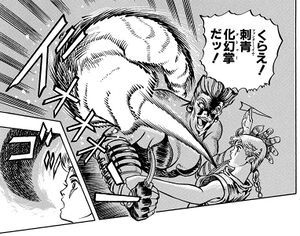 Michael later discovers the old racing stub that Irene bought was actually a big winner and moves to Los Angeles to start his music career. He eventually releases a debut single about a mysterious girl, selling over 600,000 copies. Irene had vanished and no one had ever seen her again. On the seventh day of the month, it is reported that a mafia boss named Tony Bormont had strangely committed suicide in his Chicago estate by stabbing himself in the throat. He had given the order to have many of his rival gangs across the U.S. assassinated. Police attempt to continue the investigation as his motivations for suicide were unknown. 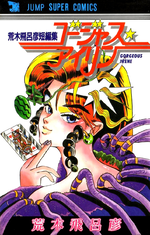 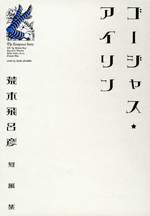 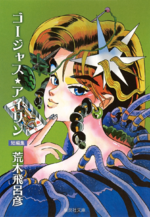 Author's Note
“
Gorgeous Irene
I considered making it into a serialized manga, but at the time, I was a little reluctant to draw a full-length shonen manga with a woman who fights as the main character. Thus, I had to wait for more than 12 years before creating Jolyne Cujoh in Stone Ocean, the sixth part of my own work, JoJo's Bizarre Adventure.
”
—Hirohiko Araki
“
『ゴージャス＊アイリン』
連載しようか？ という企画もあったけど、当時、闘う女性を主人公に長編の少年マンガを描くのはちょっと抵抗があって、自作『ジョジョの奇妙な冒険』の６部『ストーンオーシャン』の「空条徐倫」まで12年以上待つことになる。
”
—Hirohiko Araki

The series was originally published as a two-part story, chapters 1 and 2 being released in the Autumn Special of Weekly Shonen Jump on October 1, 1985 and in Super Jump #1, 1986 (December 29, 1986) respectively. It was later compiled in tankōbon format along with various other Araki works made before JoJo's Bizarre Adventure in 1987. This volume, The Gorgeous Irene, was later republished in aizōban (collector's) and bunkoban editions. In Italy, said compilation was published by Star Comics as a part of the Il bizzarro universo di Hirohiko Araki (Hirohiko Araki's Bizarre Universe) collection in 2019.