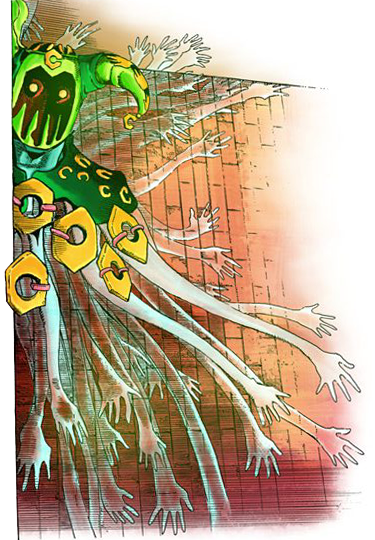 Vitamin C (ビタミン, Bitamin Shī) is the Stand belonging to Tamaki Damo, featured in JoJolion. It is a tentacular Stand with a hand motif. When someone touches the fingerprints it leaves, the victim will be softened to the point of liquefaction as long as they remain within range.

It has a vaguely humanoid head with drooping jester horns similar to King Nothing, with a hand-shaped marking resembling Lucky Land's logo on its face. The rest of the body below its shoulders consists of a trailing mass of hand-shaped tentacles, akin to a jellyfish. It is covered with nut-shaped objects, some of them chipped in order to resemble the letter C.

The series is known for alternating colors between media, the information presented below may or may not be canon.
Body
(Lime, green, and yellow head with a red face, yellow eyes, white hands.)
Accessories
(Yellow hexagonal ornaments held by pink string.)

Vitamin C is a terrifying Stand to face in close quarters and narrow spaces because its softening power renders everyone powerless before Damo. Vitamin C doesn't show exceptional physical abilities but is at least able to punch a softened person into a wall.[1] Vitamin C is also shown to have exceptional speed which is able to easily outspeed Killer Queen, multiple Sheer Heart Attacks, and even Soft & Wet.[1][2] 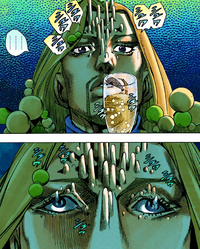 Anyone, even Stands,[2] who touches the fingerprint will be softened, taking the characteristic of a liquid and becoming elastic.[5] People lose their consistency and typically melt into a puddle of flesh over time.[3] It becomes easy for Damo to insert random objects into his victims and even slice into them. He notably cuts limbs and organs from his softened victims with a 1000 yen bill.[6] In that state, the victims become unable to move or attack, as any impact makes them lose their coherence. Thus they are powerless, and Damo is free to torment and kill them. Damo seems to be able to modify the speed at which people are softened. Joshu was softened over a sizable period[3] while Hato was reduced to a liquid almost immediately when Damo attacked her.[1]