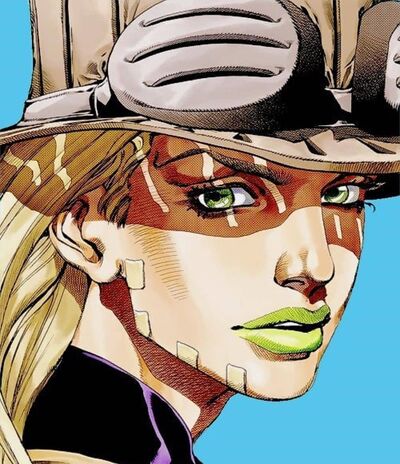 Realice (リアリス Riarisu) is a minor contributor to JoJo's Bizarre Encyclopedia. She creates this user profile for the sake of being a serious editor of this wiki. Her goal in this wiki can be read in her editor's plan. There will be a lot of edits made in this user page because she often uses this profile page to test DokuWiki features.

Riarisu is an average woman. Her ideal appearance is to be like a bifauxnen character.

She has known JoJo since she was in high school. She saw some of her friends using JoJo LINE stickers. They were also talking about some quotes that she didn't understand because she didn't read or watch JoJo but at least she knew if those were JoJo references.

Since she knew Raidiance was being a newbie as a JoJo fan, sometimes she shared jojokes in the group chat even though she never watched it. Because of that, Seth tried to influence her as well. She wasn't really interested in anime because she didn't really have time to watch and she preferred manga because she could read faster. When Seth said JoJo had not ended yet it made her less interested because she didn't like waiting time. However, she still lent her external harddisk to let him copy all JoJo anime from Part 1-5.

She never touched JoJo anime until the end of the 2019 when she was finally free from college life. She used her eating time to watch the anime. She started to get interested when she reached Part 2. By the time she finished the whole anime until Part 5, she started to read the manga. Araki's art in the manga is very gorgeous. Besides that, the completed manga series (Part 6-7) were already colorized. She knew she couldn't waste her time to not read these masterpieces. She even catches up JoJolion manga's latest chapter.

She likes JoJo because of its wholesomeness. Now the next thing you're going to say is: "Srsly Ari? This ain't wholesome! You've seen a lot of dead bros and foes in JJBA." Her simple answer is: You just haven't seen the wholesomeness. There are so many wholesome fanarts, fanvids, and edits of JoJo. She also watched too many shitvids and saw too many shitposts of JoJo to the point that her YouTube and Instagram recommendations are full of JoJo. She even tried to learn Japanese so that she could watch Japanese fanvids and read some Japanese mini fan comics of JoJo. She loves JoJo's cute merchandise such as Nendoroids and Tomonui Plushies. Getting one of JoJo Nendoroids, especially Jotaro, is one of her bucket list although it's almost impossible to order it again now. She is also an active player of JoJo PPP.

Here's some recommendations by Riarisu to make you love JoJo's Bizarre Adventure more and more.

She also wrote a bunch of JoJo reviews in essay. You can read it here.

Disclaimer: This least to favorite list is based on Riarisu's satisfaction of the part's story progress, the whole characters' personality, and how good the part or the JoJo is related to other parts. Keep your opinion by yourself because she doesn't want to hear it.

Here's the list of Riarisu's other favorites beside JoJo's Bizarre Adventure.