Pluck for Tomorrow and the Successor (story arc)

Pluck for Tomorrow and the Successor 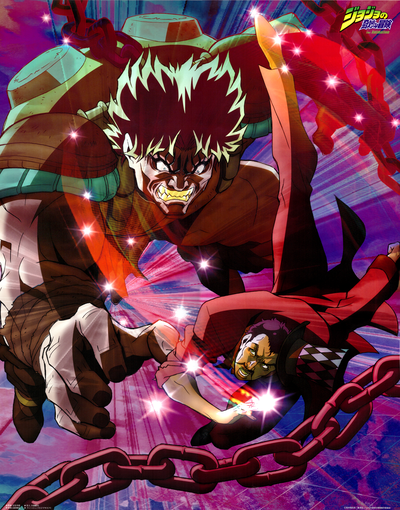 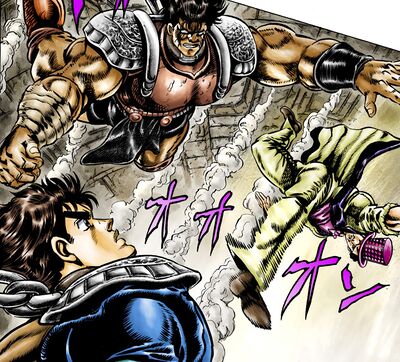 Volume 4
Pluck for Tomorrow and the Successor (あしたの勇気・うけ継ぐ者, Ashita no Yūki Uketsugumono) is the eighth story arc in Phantom Blood.

It narrates Jonathan and Zeppeli's battle against the zombie Tarkus, against whom Zeppeli meets the end his master prophesied. 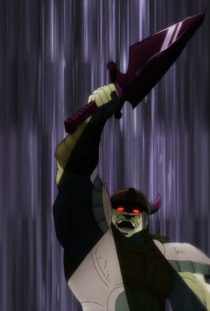 Tarkus gloats about his skill in killing.

Returning to the graveyard, Poco attempts to tell two thugs about the zombie knights, who do not believe his story at first but run off in fear upon seeing Tarkus. Fortunately, Jonathan comes to Poco’s aid, with Zeppeli and Speedwagon behind him. Tarkus proclaims his devotion to the art of massacre and strikes the earth with his massive sword, causing the ground beneath Jonathan and his allies to give way. The group jumps from the crumbling rocks, which reveal the ruins of a training ground for knights. After drinking the blood of the two thugs, Tarkus charges at his adversaries, who are now cornered at the cliff's edge. Jonathan and Zeppeli, noticing scattered leaves on the ground, decide to use the Ripple to magnetize the leaves into a single giant leaf, which the party uses as a hang glider to escape Tarkus.[1]

Zeppeli begins to explain his past concerning the Ripple to the group. After Zeppeli's first encounter with the Stone Mask, he swore to find it and destroy it, and began to search the world for the mask. Two years into his search, he found a young man in India who called himself a doctor and could heal a patient's leg wound by simply touching it. Upon asking how the doctor got this ability, Zeppeli was told to go up the Nuu River and seek a master named Tonpetty. Zeppeli eventually arrived at Tonpetty's temple, where the soon-to-be master and pupil shook hands. Zeppeli does not tell his companions of Tonpetty's warning: if Zeppeli were to train under him, he would one day meet an evil enemy and die by their hand. 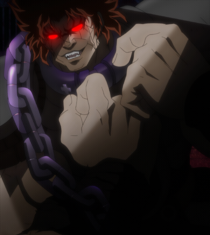 Tarkus prepares to fight in the Chamber of the Two-Headed Dragon.

Suddenly, Tarkus jumps onto the glider. The group jumps onto a nearby building in the ruins, leaving the glider and Tarkus to crash farther down the building. Though Tarkus' bones are smashed from the landing, he begins climbing the side of the building regardless. Intending to fight Tarkus here, Zeppeli tells Jonathan to enter the building and find a place for Poco to hide. As soon as Jonathan opens the door, however, a neck brace on a chain hooks itself around his neck. The door closes and locks behind Jonathan as he is pulled up to the ceiling. Tarkus enters the room through a vent on the other side; recognizing it as the Chamber of the Two-Headed Dragon, Tarkus puts on the room's other neck brace, intending to relive the Chain Neck Deathmatches he had fought there over 300 years ago.[2]

Tarkus explains to Jonathan that the key of each collar is stored within the other, forcing both combatants to fight to the death. Jonathan soon discovers that he is at a heavy disadvantage: not only is he unable to breathe with the collar around his neck, but he also cannot send Ripple energy into Tarkus through the ceiling-attached chain. As Zeppeli tries in vain to break down the door, Speedwagon sees a lever inside the room and concludes that the lever is connected to the door. Though Speedwagon notices a window small enough for Poco to fit through, Zeppeli refuses to endanger the boy. The two begin climbing toward the vent Tarkus used, but Poco recalls his sister's words about cowardice and climbs into the window anyway, determined to save his sister and the town. As he enters the room, Poco is kicked across the room by Tarkus, who is unable to fatally wound him due to being yanked backward by Jonathan. Luckily, Poco lands near the lever and manages to push it, opening the steel door.[3]

As Speedwagon tends to Poco's injuries, Zeppeli recalls Tonpetty's second prophecy and realizes that he has entered the place where he will die. Accepting his fate, Zeppeli attempts to attack Tarkus with a spinning divekick. However, the zombie leaps above him, wrapping his chain around Zeppeli's body. As Tarkus violently yanks the chain, Speedwagon can only watch in horror as Zeppeli is torn in two and Jonathan's neck snaps. Tarkus gloats over his victory until he notices that the two victims are still breathing. Though Tarkus rushes toward them, Zeppeli is able to grab Jonathan's hand and transfer his remaining life energy into him.[4]

Empowered by Zeppeli's life energy, Jonathan heals his neck and rips his collar apart. After slicing Tarkus' arm in two, Jonathan unleashes a barrage of punches onto him, killing the zombie once and for all. Though Jonathan begins to cry over his master's fate, Zeppeli urges his pupil to stop mourning and quickly leave to destroy the Stone Mask. Having left a family behind to pursue the mask, a satisfied Zeppeli passes away in Jonathan's arms. Jonathan, Speedwagon, and Poco tearfully leave the ruins.[5]