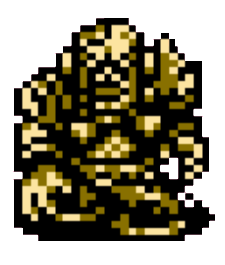 In the game, he is the first boss fight for Jotaro and wields a Stand that can petrify anyone after he punches them. After the boss fight, he returns as a regular enemy, although his sprite is colored pink.

The Stand User is a bald man with something resembling a dent in his head, an aggressive expression, and armor-like clothing.

Jotaro scenario: When Jotaro travels to Sutangari Town, he discovers that all the people were turned into stone statues, including his friends Kakyoin; Polnareff; Avdol and Joseph. After a long search, Jotaro finally discovers the Stand User in a nearby Cave and managed to beat him with Star Platinum. When Stand User is defeated, the people affected by his Stand returned to normal, while he disappeared.

Another heroes scenario: When the hero travels to Sutangari Town, he discovers that all the people were turned into stone statues. Later, he finds Jotaro in an oasis, who leaves the place in search of the culprit of that situation. The hero follows him until he finds Jotaro again, just in time to observe the fight between him and the Stand User. When Stand User is defeated, the people affected by his Stand return to normal.

This User's unnamed Stand turns anyone into stone that its user defeats, or is about to defeat, with a special punch.

This transformation renders its targets immobile. However, some targets can sense what is happening around them and even talk; possibly because they also are Stand users. When the User is defeated, all targets revert to normal.